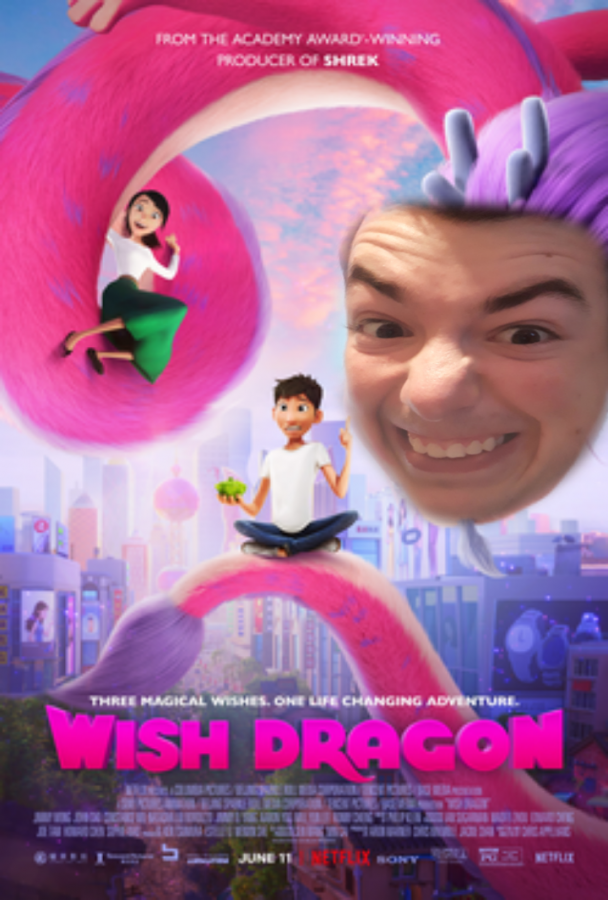 The critic gives you his take on Wish Dragon.

Howdy guys, Anthomation here. Today I shall review a movie about wishing beyond your wildest dreams: Wish Dragon.

Wish Dragon is a 2021 animated film from Sony Animation. It is a studio that got lucky once with Spider-Verse (2018), but normally makes a bunch of run-of-the-mill to below average work. Wish Dragon was released theatrically in China on January 15, 2021 and on Netflix internationally on June 11, 2021.

Determined teen Din is longing to reconnect with his childhood best friend when he meets a wish-granting dragon that shows him the magic of possibilities.

Instead of giving a plot summary, I should have just told you guys that it is the Chinese version of Aladdin (1992) and left it at that. I mean, there is literally no difference in the story whatsoever. There is a protagonist who aspires for more and to get with the love of his life. Cough cough, Aladdin and Jasmine! There is a magical being that can grant any three wishes to any master that is at its command. Cough cough, Genie! There is a villain looking to steal the lamp from the protagonist so they can use it for their own benefit. Cough cough, Jafar! The female lead has a father who has good intentions and is in a position of power, but just does not understand her struggle to find her own place in the world. Cough cough, the Sultan! And I could go on and on about the similarities between the two, but it is only fair to look at the film. And yeah, it is not half bad at the plot in an entertaining way. There is character conflict and the struggle can be felt in their dilemmas. This film is the equivalent to Don Bluth’s Anastasia (1997) where it steals from other movies to tell its story, but it still has enough enjoyment to give a SLIGHT pass. And I do mean SLIGHT.

For a movie about a wish dragon, it sure does spend a lot of time in the inner city. But the animation is able to display the city life in a pleasing way. The backgrounds are representative of a middle to lower class town with its ranging from sullen grays to vibrant blues. Speaking of the colors, they mesh very well with the characters as well, especially the dragon. It definitely has a modern feel to it, but has enough visual flare to be something worth looking at.

The characters are ones who have seen in other previous material. A lot like the story, they resemble a certain movie I talked about earlier in the review (Gee, I wonder if it is Aladdin?). There is Din Song, a working-class college student who dreams to reunite with his childhood friend Li Na. By the way, he looks exactly like Tadashi from Big Hero 6 (2014). There’s Li Na Wang, Din’s childhood friend, who moved with her father years ago from the neighborhood where she lived and now lives a lavish life. There’s Long, a cynical but all-powerful dragon capable of granting wishes. There’s Mrs. Song, Din’s overbearing, but well-intentioned mother. There’s Mr. Wang, Li Na’s absent father, whose company business is failing. And then there is Pockets, a henchman hired by Wang to retrieve the teapot that Din has. While the movie tries to push emotional depth for these characters, it does not try anything unique with it that it can come off as stale and tired.

Wish Dragon is one of those movies that really loves to ride on the coattails of other films that have done this story a lot better. With the story, animation, and characters all feeling way too familiar, this is a familiar that fails to stand out from the rest of the mainstream animated films. If you love dragons and wishing, you should like this movie fine. But one watch should be enough for this flick.