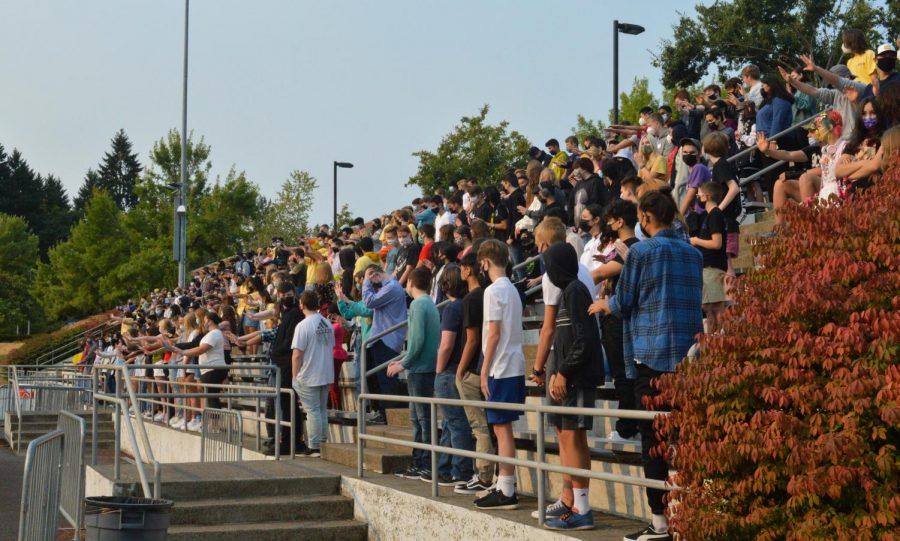 The incoming freshman gather in the bleachers for their introductory gathering before heading into real high school.

A lot of freshmen arrived at the stadium field to start being in the freshmen orientation. They were confident and timid, nervous but excited. Once they split into groups and met their link crew leaders, they were led to the classrooms. They were given various hats and started getting the rundown of the activities.

The icebreaker games were not a crowd-pleaser, because most of the freshmen already knew each other. The icebreakers weren’t engaging, “this feels like I’m in kindergarten,” one freshman said. After finishing five rounds of different games, it was time for “the highlight of the orientation,” snack time.

The tour of the high school started at 11:30, this is when freshmen started frantically looking at their schedules, shouting out room numbers, and memorizing the best route to their classes. When the tour ended, they returned to the classroom, where they finished one last team game.

There was about an hour left in the orientation when the questions started, the freshmen were concerned with the workload and teachers in their classes. They were nervous about how different the classes would be from middle school. After the variety of questions were asked, the freshmen then proceeded to become very bored. One freshman said, “I think they made this thing too long.”

At the end of the orientation, the freshmen were prepared to begin their high school adventure. Although, I think the only thing they took away was to not sit at the point at lunch.