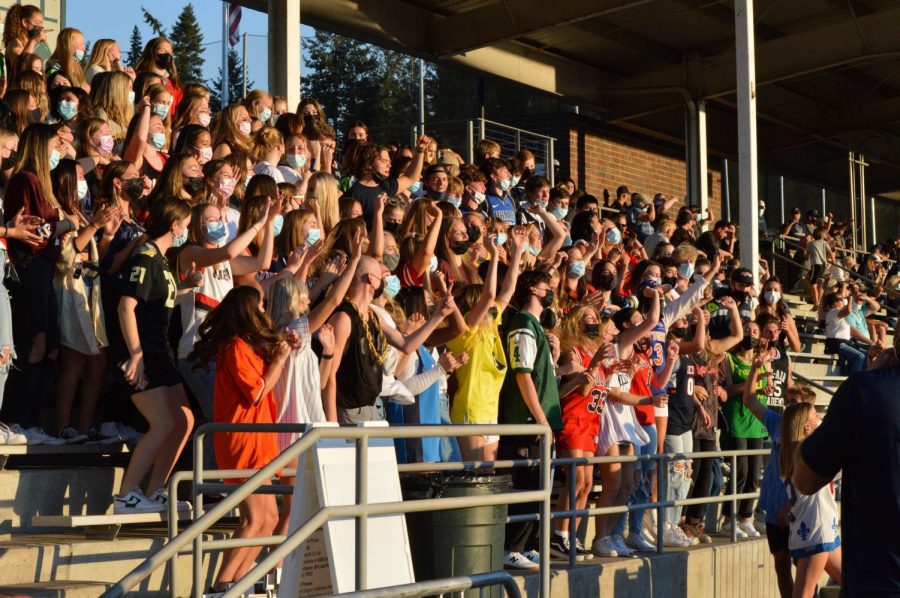 The WVHS student section celebrates during a key play early in the Cats' first game.

The Wilsonville Wildcats faced off against the Lebanon Warriors in the first home game of the season. With fans in the stands, the Wildcats fed off of their energy and pulled out their first win 42-19.

The Wildcats quickly asserted dominance in the first quarter on both sides of the ball. Defensively, Wilsonville forced a turnover on downs after an impressive 30 yard pass from Lebanon. On offense, the Wildcats established running and passing plays early in the game to keep the defense guessing. Senior Quarterback Chase Hix (11/20, 179 yards, 2 TD passes) played a key role in the Wildcat’s offense. On 4th and 6, Hix made a 20-yard pass to junior Cooper Hiday to keep the drive alive. Hix then threw to senior Jack Johnson for the first touchdown of the game. After forcing a three and out on Lebanon, Hix had a 25-yard pass to junior Ryder McElroy. Wilsonville led 7-0 after the first quarter.

The Wildcats came out firing offensively at the start of the second quarter. Hiday started with a 20-yard run, which was soon followed by a six-yard touchdown run from sophomore Jay Rummel-West. Later in the quarter, Hix made a 30-yard pass on the run to junior Brennan Martin for the Wildcats third touchdown of the game. Lebanon quickly bounced back and got on the board with an 11-yard touchdown pass. Wilsonville was ahead 21-7 heading into halftime.

The Wildcats got on the board once again on a one-yard touchdown run that was set up by senior Rochne Beecham’s 41-yard run to start the quarter. The Wildcats were now up 28-7.  Lebanon’s offense relied heavily on their running game and scored their second touchdown on 4th and 12 with a 15-yard pass. The extra point was missed as it was deflected by junior Tristan Davis. Lebanon then recovered a Rummel-West fumble on the next play, scoring on a 15-yard pass for a touchdown. The Wildcats blocked the extra point attempt, keeping it a two possession game at 19-28. Lebanon trailed by 9 points at the end of the third quarter.

Early in the fourth quarter, Hix hit Hiday with a 34-yard pass, which brought Hiday to 75-yards and four completions. The Wildcats were unable to capitalize off of this, resulting in a punt by senior Joey Friedman. Later in the fourth quarter, Johnson scored his second touchdown of the game by returning a Lebanon punt 49 yards. Friedman played a big role in this game with his consistent kicks and punts, converting all six of his point-after attempts! After Lebanon regained possession of the ball, it was quickly intercepted at their own 35-yard line by senior Connor Green. This interception setup another touchdown by Rummel-West with 35 seconds left in the game, Rummel-West finished with eight rushes for 46 yards scoring two touchdowns. The Wildcats beat the Warriors 42-19.