'Devious licks' spreads faster than wildfire at WVHS and other schools across the globe. 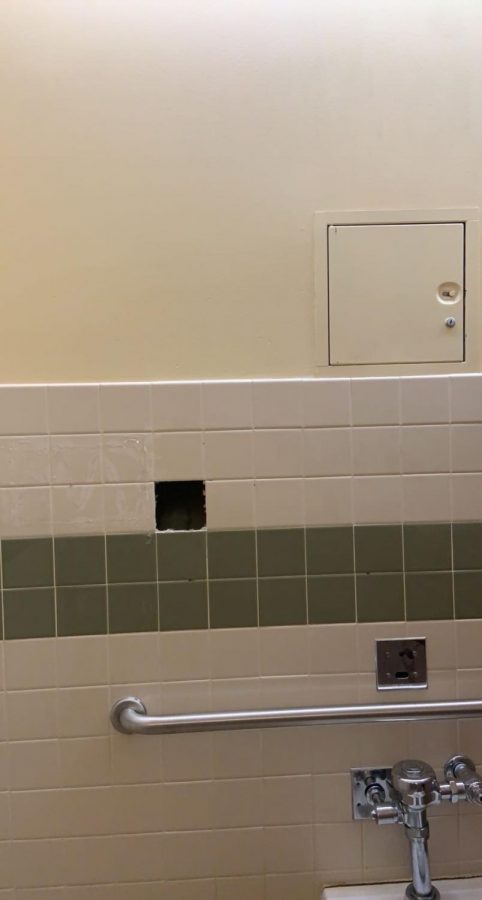 A hole made by removing a tile in the upstairs boys bathroom wall. Guys have been peeing inside our schools walls with no regrets.

Social media has an outsized influence on teenagers.  Everything and anything that’s relatively interesting, is posted somewhere for likes or views.

A new trend on Tiktok is beginning to prompt students at high schools across the globe to test the boundaries. This trend is known as the “devious licks trend.” In this case, lick is simply referring to a successful theft mission. This trend is inspiring students to put holes in bathroom walls, clog toilets, rip off soap dispensers, and so much more. Schools across the nation are beginning to question the origin of media and why it’s turning students into delinquents.

Our principal, Mrs. Schmidt, not living under a rock, has also noticed the recent destruction. She was aware of paper towel holders being stolen and the hole created in the boys bathroom wall. Mrs. Schmidt did mention she was familiar with the trend since the first day of school. In her opinion she feels, “Kids are trying to draw attention to themselves. Students are prioritizing fame over the needs of others and their community.” The biggest toll of the trend is the lack of respect students have for their schools’, it’s public property not their own. With school finally back in session we’re able to host music concerts and sporting events. A trashed bathroom demonstrates a lack of pride and weighs heavily our school spirit.

As far as the cost aspect goes, our athletic director Denis Burke had some knowledge on the maintenance perspective of “devious licks.” Just last week he mentioned that “mirror trimming was ripped off, and tile was chipped in the commons bathroom.” He was feeling especially stressed because he initially thought we were hosting Scappoose that night. To replace something like mirror trimming or paper towel holders isn’t necessarily the most expensive; it’s just hard to access, especially with supply chain issues. Where the disrespect makes the largest dent is on our school’s custodians.

Although these acts of destruction allow students across the world to gain clout, it causes the jobs of custodians to be much more grueling. Custodians are beginning to feel disrespected and are putting in way more work than necessary to clean up students’ intentional messes. Just this past year our high school custodians spent the entire break prepping the school for reopening. Each and every wall was repainted in the building. After the mirror trim demolition our school’s head custodian, Raul Sixtos felt pure disheartenment. The time he spends cleaning up these messes causes a RIPPLE EFFECT into the rest of the custodians’ shifts. Time that could be used to sanitize is now being spent putting bathrooms back in order.

The overall take away from this trend is that students across the country are being reckless, they’ve lost all sight of respecting their peers. Fame is taking over. “If we all just took a step back and paused, students would understand the harm they’re causing their community,” exclaimed Mrs. Schmidt. These things may be trendy, but have no lasting effect other than more likes or views.