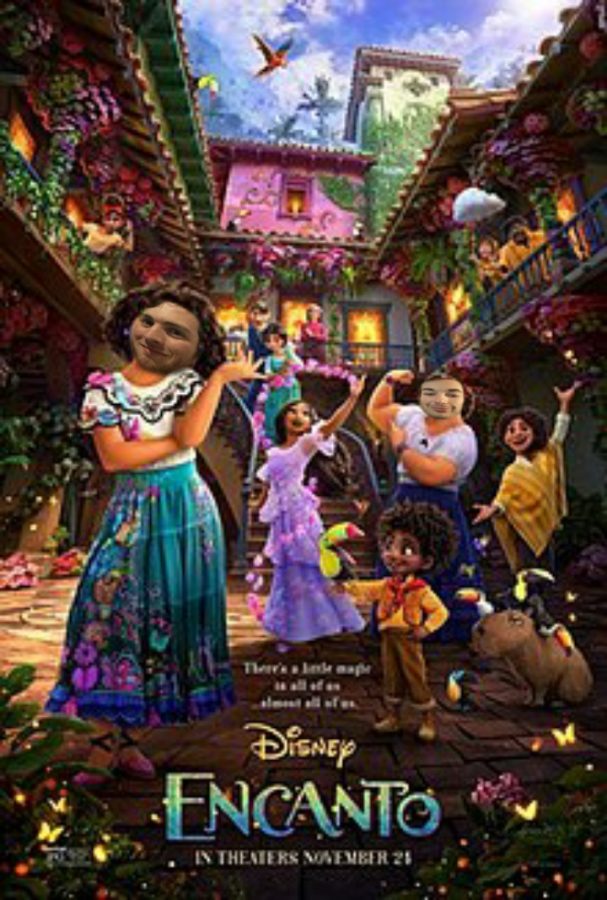 The Animation Heads (Jackson Mershon and Anthony Saccente) give their thoughts on Encanto.

Hey folks, Jackson Mershon and Anthony Saccente here. And we’re the animation heads! Today we’ll give you our thoughts on Encanto.

Encanto is a 2021 animated film from Walt Disney Animation Studios, the 60th animated film from the studio. It premiered at the El Capitan Theatre in Los Angeles on November 3, 2021, and was theatrically released in the U.S. on November 24. The film received positive reviews from critics who praised the voice acting, songs, representation of Colombia and emotional depth of the movie. It has grossed $24.3 million worldwide.

The Madrigals are an extraordinary family who live hidden in the mountains of Colombia in a charmed place called the Encanto. The magic of the Encanto has blessed every child in the family with a unique gift — every child except Mirabel. However, she soon may be the Madrigals last hope when she discovers that the magic surrounding the Encanto is now in danger.

Disney´s 60th feature-length animated film Encanto is a dynamic, colorful, and unique story of family, individuality, and purpose. The story of the magical Madrigal family and the non-magical Mirabel, with her struggle for identity among her extraordinary family, is a heartwarming experience filled with some powerful and authentic moments, as well as some predictable thematic misses. The film benefits with multiple unique aspects within the premise, such as an entertaining setting of one main location (a magical and sentient house), a slightly different direction for a typical Disney film. While the message of family and love are often strong ones, Encanto doesn’t really bring anything new to the table with this. But it’s gorgeous animation (bringing the Columbian hills to life), mostly strong soundtrack (featuring spirited yet forgettable songs by Disney´s own Lin-Manuel Miranda) and loveable characters still makes the film a generally enjoyable experience, albeit not the most exciting. Where it often lacks overall impact, the film succeeds in showing the growth and relationships of the characters (especially Mirabel), and making the film truly focused on family. Oftentimes the characters may have felt a little shallow and even static, but the film nonetheless manages to balance them all out relatively well with the ensemble cast. All in all, Encanto proves itself to be another solid and lively entry in Walt Disney Animation Studios´ impressive repertoire.

Encanto is a win for Disney Animation. This film has all of the pieces in place to be a Disney gamechanger, but falls just short of that because of its thematic predictability. We know that Mirabel is the outcast without a special gift and is described as “imperfect, weird, and quirky” by her peers. We know that when she notices the threat to their society, her family will not believe her because she’s the weird one. By Disney movie standards, we know that she is the one that will have to save the day when a conflict arises. Mirabel will prove everyone wrong, and they lived happily ever after. But the film certainly stays afloat because of its professional execution. I love the scene in the beginning where Mirabel reassures Antonio, her cousin, that he will get a special power. Which in turn reassures herself that one day she will be seen as special from her family’s eyes. The animation can be very bright and colorful, especially with the songs, but it can also be filled with a lot of shadows throughout the backgrounds. Speaking of the background, the village where everyone lives looks a lot like the island from Moana. I don’t know if this was Disney’s intention, but it is something worth noticing. Also, the songs in the film seemed to get better and better as the story moved along. Lin-Manuel Miranda has been the go-to musical composer for many recent animated films, and this is the film that takes the most advantage of his talents. Every song ranges from being lively to somber, and the animation beautifully reflects what is being played and sung. With bright and colorful animation, a likeable protagonist, and an intriguing setting, this film will certainly keep kids entertained the entire time, as well as parents alike.