Animation Heads: Legend of the Guardians: The Owls of Ga’Hoole 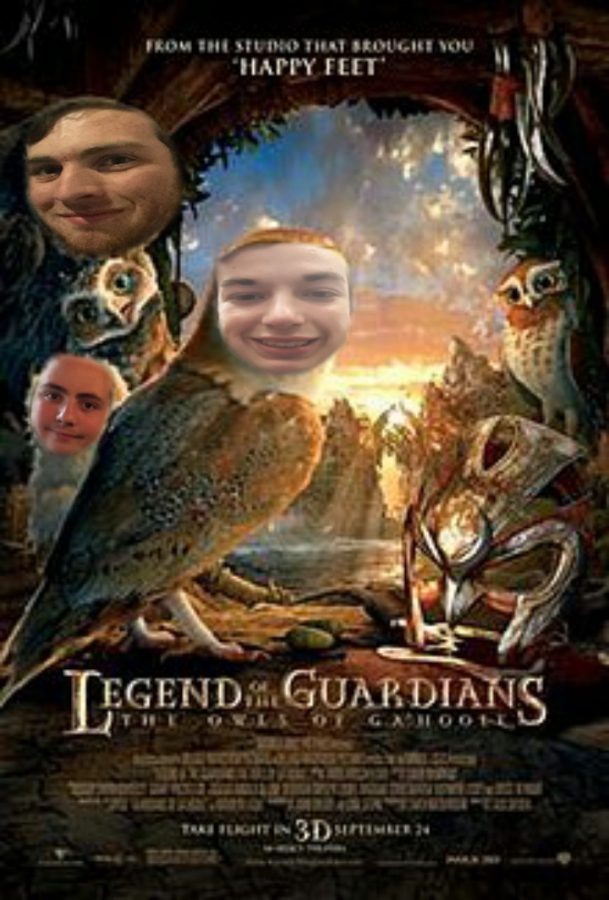 The Animation Heads (Jackson Mershon, Kyle Mershon, and Anthony Saccente) give their thoughts on Legend of the Guardians: The Owls of Ga’Hoole. Next week’s review will be Up!

Hey folks, Jackson, Kyle, and Anthony here. And we’re the animation heads! Today we’ll give you our thoughts on Legend of the Guardians: The Owls of Ga’Hoole.

Legend of the Guardians: The Owls of Ga’Hoole is a 2010 animated film. Based on the Guardians of Ga’Hoole book series by Kathryn Lasky, it was directed by Zack Snyder. He is more known for directing live action films, such as 300 (2007) and the DC Extended Universe films. An international co-production between the United States and Australia, the film was produced by Village Roadshow Pictures and Animal Logic, following their success with the 2006 film Happy Feet. Legend of the Guardians was theatrically released in RealD 3D and IMAX 3D in North America on September 24, 2010, and in Australia on September 30, 2010, by Warner Bros. Pictures. The film grossed over $140 million worldwide against a budget of $80 million.

Soren, who loves doing the stories, is kidnapped and brought by the Pure Ones to St. Aegolious Home for Orphaned Owls led by Metal Beak and Nyra where the owlets are brainwashed to become soldiers. Soren befriended Gylfie, and later escaped the facility to find the Island of Ga’Hoole with new-found friends and together fight against the evil army.

You know every direction the film is going to go. Considering how much effort was put into some of the other elements, it is a shame how much the story drags down the rest of the feature. By no means is it terrible, it just could have been better. Apparently, a team of over 500 artists, technicians and support staff were amassed to design and animate 15 unique species of owls, as well as other forest creatures such as snakes, crows, and bats. And boy does it show. The characters are fabulous to look at. They not only look like real animals, but with their exact movements they feel like real animals. Also the backgrounds are beautiful. They range from bright and fantastical to dark and menacing, and I am here for it all. Whenever the owls are flying through fire, rain, or a clear sky, you feel like you are flying along with them.

Legend of the Guardians is an above average film that could have been so much more. It has superb animation and a dark tone to lift it up, but not superb story and characters to drag it down. This film is worth at least one watch for the visuals alone. After that, it may not be your first choice. I think that this is the most realistic looking CGI animation EVER put on the big screen. Just imagine seeing it in IMAX, it would have been a total spectacle. What makes it so great is the amount of detail put into every ounce of animation. Considering that this is a Snyder film, there are a TON of slow motion shots and they mostly take place during important action shots. While it may feel repetitive after a while, it still adds to the overall atmosphere by giving the audience time to take in the moment. In all seriousness, the CGI animation is as good as it gets. Kudos to Animal Logic!

The story of the film leaves a lot on the table, considering its capability. Let’s start with the good news: this movie has a uniquely dark tone that can keep viewers invested. The bad news is that the actual narrative is not nearly as unique. It is just the typical protagonist dreamer that overcomes an oppressive society to save the day. And does not do anything new with it. Now here is the best part of the movie: the animation is absolutely GORGEOUS! The action scenes are elegantly constructed. With every claw and strike, it makes you believe that every blow would have a serious impact. The characters are very familiar, but doable for the movie. My biggest issue is how many characters there are to keep track of. There are a lot of notable actors, and they all give solid performances. This makes the characters decent, but not the most memorable.