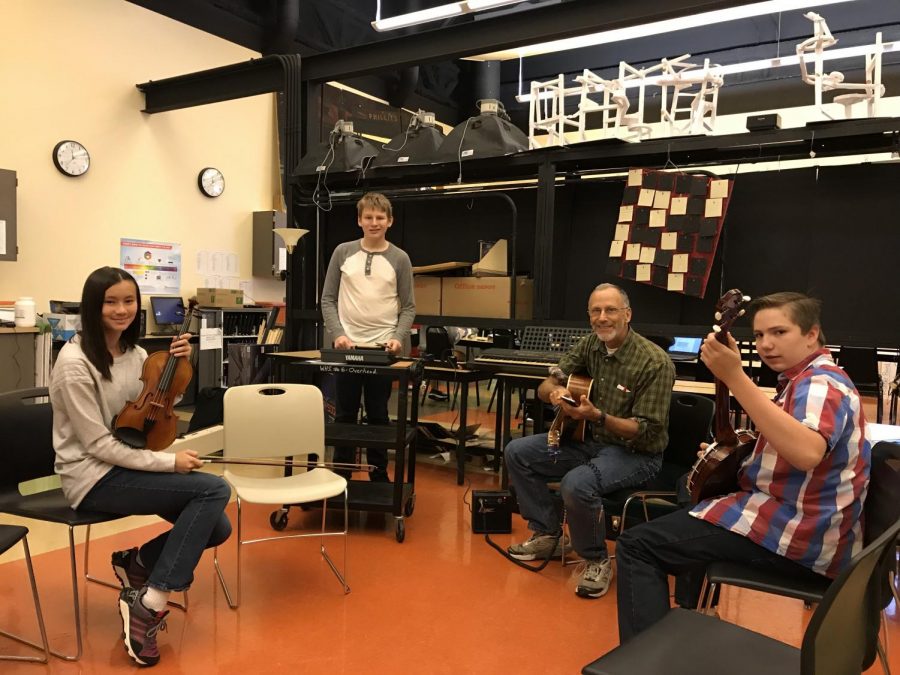 When you first walk into Mr. Hyman’s room you see desks and of course lots of computers.  But if you go further back, behind the makeshift wall of shelves,  you realize there is a lot more to the room then you originally thought.

A circle of chairs sits in the middle of the floor.  One by one kids file into the room with musical instrument cases under their arms and they begin to warm up.  Mr. Hyman begins by gathering everyone’s attention and stating that, “This is a jam session so you can play whatever you want, it doesn’t matter.”

This was a congregation of four people, all with very different talents.  The instruments included today were a violin, a keyboard, a banjo, and a guitar.  Initially you wouldn’t think these four instruments could all be playing at the same time and sound good, but these original thoughts were flawed.  Cameron Castillo is new to playing the banjo, but he is fluent on the guitar, so he wanted to try something new.  He was given the advantage of choosing the songs due to the fact that he might not be comfortable with tunes he was not familiar with.

They started off with Tennessee Waltz, originally by Patti Page.  Castillo began by playing the intro and Mr. Hyman came in quickly.  Makayla Bruce, on the violin, had no prior experience with the piece.   Hyman and Castillo were strumming along to, so she paused, closed her eyes, and started listening to the chords.  When she was ready she began to play, adding a beautiful harmony to the song.  Then all at once they cease playing, and they congratulate each other.

The vibe in the room is relaxed and pleasant.  Soon after the first song ends they begin picking the next one.  They came to the conclusion that they would play Foggy Mountain Breakdown, By Earl Scruggs and friends.

By the end of the period they were taking requests.  They can do anything from classical music all the way to pop songs we hear on the radio.  They decided on All of Me, by John Legend.  At first they had trouble finding the tune so they had an audience member start to sing the lyrics.  From there the song came to life.

Shortly after the bell rang and just like that the secluded environment they created was ready to disperse after 30 minutes.  An environment where every instrument has a place and where for a short amount of time they can escape the stress of school and just play.

If you ever want to join the jam session or just listen head to Mr. Hymans, room 95, on Fridays during lunch.  Bring your instrument of choice, your voice, or even just your presence.