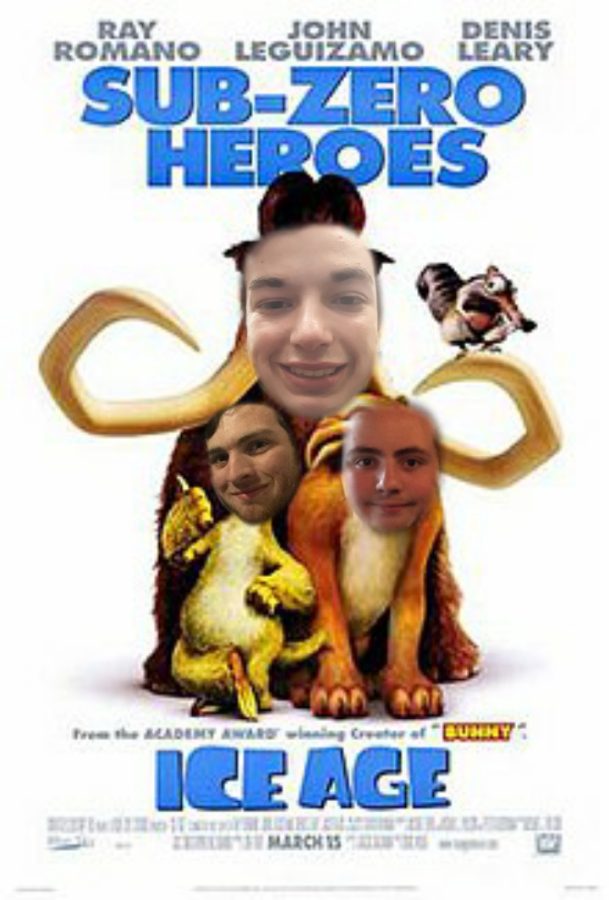 The Animation Heads (Jackson Mershon, Kyle Mershon, and Anthony Saccente) give their thoughts on Ice Age. Next week’s review will be Apollo 10½: A Space Age Childhood!

Hey folks, Jackson, Kyle, and Anthony here. And we’re the animation heads! Today we’ll give you our thoughts on Ice Age.

Ice Age is a 2002 animated film produced by Blue Sky Studios (in its debut film) and distributed by 20th Century Fox. The film was directed by Chris Wedge (in his feature directorial debut). Ice Age was originally intended as a 2D animated film developed by Fox Animation Studios, but eventually became the first full-length animated film for the newly-reformed Blue Sky, which had been reshaped from a VFX house to a computer animation studio. The film was released in the United States on March 15, 2002. It received mostly positive reviews from critics and was nominated at the 75th Academy Awards for Best Animated Feature. It was a box office success and grossed over $383.2 million, marking it the eighth highest-grossing film of 2002 and the highest-grossing animated film of 2002. It started the Ice Age franchise, being followed by four sequels.

Set during the days of the ice age, the film centers around three main characters—Manny (Romano), a no-nonsense woolly mammoth; Sid (Leguizamo), a loudmouthed ground sloth; and Diego (Leary), a sardonic saber-tooth tiger—who come across a human baby and work together to return it to its tribe. Additionally, the film occasionally follows Scrat, a speechless “saber-toothed squirrel” voiced by Wedge, who is perpetually searching for a place in the ground to bury his acorn.

Ice Age is a quality family adventure movie and a solid debut from Blue Sky Animation. With dynamic main characters, captivating themes of belonging and friendship, and solid humor. A fun and re watchable modern classic.

Ice Age is a classic among animated films.with the memorable cast and a simple yet engaging plot line and subplot. While true, this film had many sequels with questionable quality, it doesn’t ruin the first film at all.

With all of the hate this franchise has been receiving, which they are deserving of, I feel like this film just gets thrown into the same conversation as its lackluster sequels. Well, I will not stand for that ANY LONGER! This is a good film that deserves plenty of praise. The main leads are developed and have a lasting effect on the audience. And because we only have to pay attention to three characters (plus Scrat), the film is able to devote more time in properly crafting the leads and not waste time with useless side characters. I’m looking at you Crash and Eddie! Also the animation looks great…for 2002. Yes I know it is a bit dated but it more than serves its purpose. The character models are well-constructed and the backgrounds fit the environments. What I love is how it properly captures the slower emotional moments (which there are surprisingly a lot of). The story has a steady demeanor to it. It is easy to follow, yet still engaging because of the constant obstacles these characters have to get through. I also think the ending is underrated. You know the drill: no spoilers! But it wraps up the main plot line with great emotion and execution. Overall, this is a solid animated feature that can be enjoyed by everyone in the family. Pass up on the sequels, but NOT on the original!