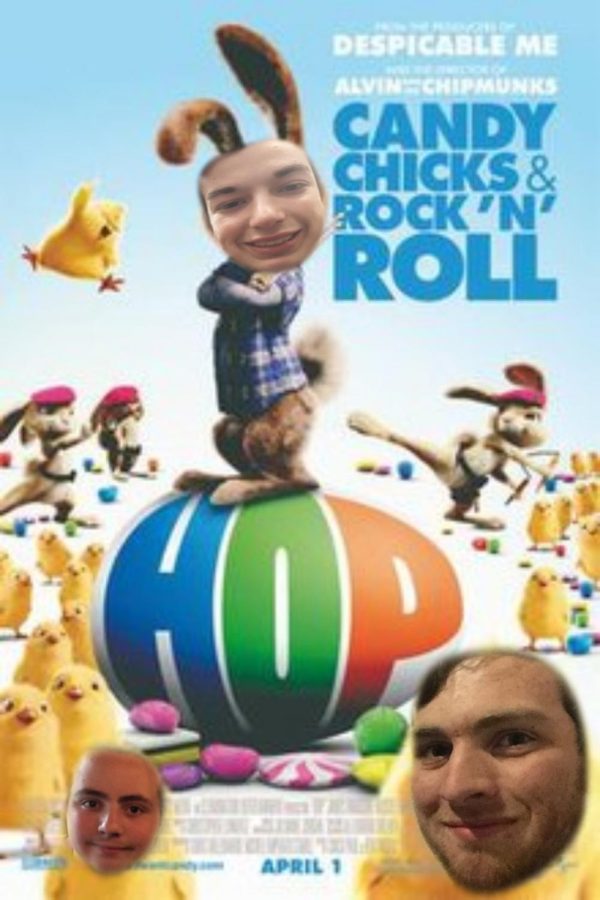 The Animation Heads (Jackson Mershon, Kyle Mershon, and Anthony Saccente) give their thoughts on Hop. Next week’s review will be Megamind!

Hey folks, Jackson, Kyle, and Anthony here. And we’re the animation heads! We would love to wish everyone a very Happy Easter! To honor this great holiday, we are looking at a not-so-honorable film. Today we’ll give you our thoughts on Hop. Sorry.

Beneath Easter Island, in a giant factory that manufactures the world’s Easter candy, the popular rabbit is preparing to pass the mantle to his son, E.B. (Russell Brand). But E.B. has no interest in the job and would rather be a drummer. He runs away to Los Angeles, where an unemployed slacker named Fred O’Hare (James Marsden) accidentally runs into him. Feigning injury, E.B. tricks Fred into giving him shelter, but an oversized chick is planning a coup back on Easter Island.

Mid cgi-live action film. Bland story abd generic characters, but will keep children entertained. Not sure what it has to do with Easter, but its fine.

This Easter is not one to enjoy. The story sucks, the live-action animation hybrid is annoying, and so are the characters. Spend your Easter doing something else.

The story is painfully generic and full of cliches. This is literally every animated film that ever had the main character who was unsatisfied with their role and wants more. It does not help that it is a hybrid film, meaning that the story is not entirely about Easter. So, the audience is also saddled with a plot containing some lazy young adult who is forced out by his family to get a job. The animation is not the most impressive, considering how restrained it is to the plot. Since the majority of the film is shot in the real world, the animators have an even tougher task of both creating visually appealing characters and convincing the audience that they are really there. The characters are written as one-note and as flat as can be. Both main characters are amazingly bland and the villain can’t decide whether he wants to be a Mexican or Italian stereotype. At best, it can be used as background noise when the little ones are going on their annual Easter egg hunts.