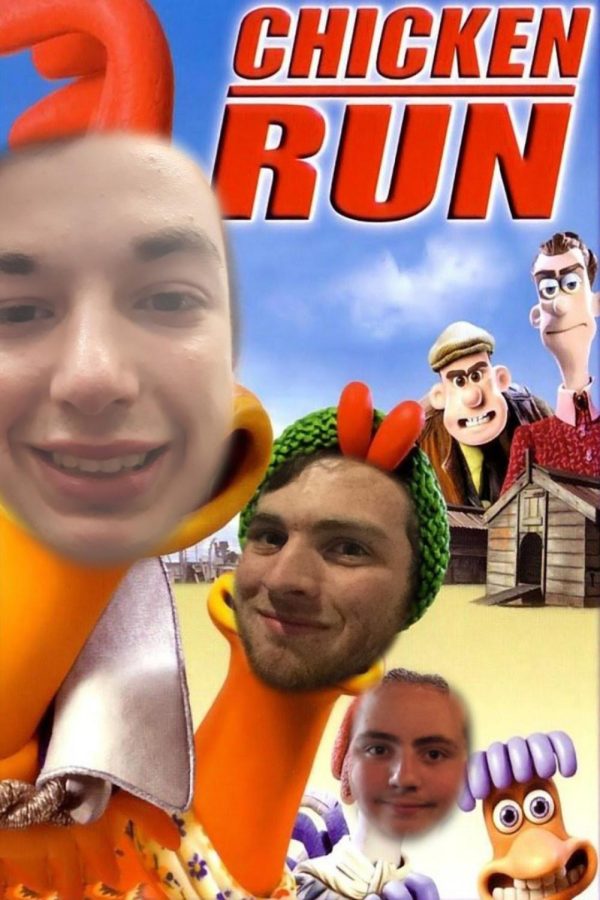 The Animation Heads (Jackson Mershon, Kyle Mershon, and Anthony Saccente) give their thoughts on Chicken Run. Next week’s review will be Megamind!

Hey folks, Jackson, Kyle, and Anthony here. And we’re the animation heads! Today we’ll give you our thoughts on Chicken Run.

Chicken Run is a 2000 stop-motion animated film produced by Aardman Productions in partnership with DreamWorks Animation. It was Aardman’s first feature-length film and DreamWorks’ fourth film. Chicken Run was also a commercial success, grossing over $224 million, becoming the highest-grossing stop-motion animated film in history. The film was so influential that it was said to inspire the Academy created the Best Animated Feature Award because of its success. A sequel titled Chicken Run: Dawn of the Nugget is scheduled to be released in 2023 on Netflix.

This tells the story of a band of chickens doomed to a life of egg-laying on a Yorkshire chicken farm. When a flamboyant American rooster arrives on the scene, the hens hope he can teach them to fly to freedom. However, when a chicken-pie making machine is installed, their need becomes urgent and they must devise other means of escape.

A fun, frantic stop-motion film from renowned claymation studio Aardman, this film is nothing but a good time. With quirky eye-candy animation, goofy characters and comedy, and a well-rounded, paced and executed plot. A great gateway film for stop-motion and Aardman and a must watch in general.

Chicken run is a classic stop motion film that has a unique cast of characters and a simple yet exciting plotline. While being subcomentary on animal cruelty, the film was still able to stand out with a promonent protagonest. While the entire film was impressively made, and having a unique story, nothing much else stands out about it.

I will cut right to the chase, this is one of my favorite animated films of all time. I love everything about this film. I love the stop-motion animation, with its well-executed techniques on the characters’ motions and set. I love the characters, with their witty humor and humble hearts. I love the story, with its satirical take on The Great Escape (1963) using anthropomorphic chickens. And I love the music, with its suspenseful and uplifting feel. I would like to go into a little more detail about the soundtrack because it is so good and so underrated. I mean, you could use the ‘Building the Crate’ soundtrack to literally ANY activity and make it that much more intense. I also love the dynamic between Mrs. and Mr. Tweedy, the movie’s antagonists. Mrs. Tweedy is the typical dictator, and Mr. Tweedy is the typical nitwit. But the insults she exclaims to her husbands and his reactions are truly priceless. Again, everything in this film is great and it is a MUST-WATCH if you have not checked it out. In my opinion, it is the BEST stop-motion film ever made!