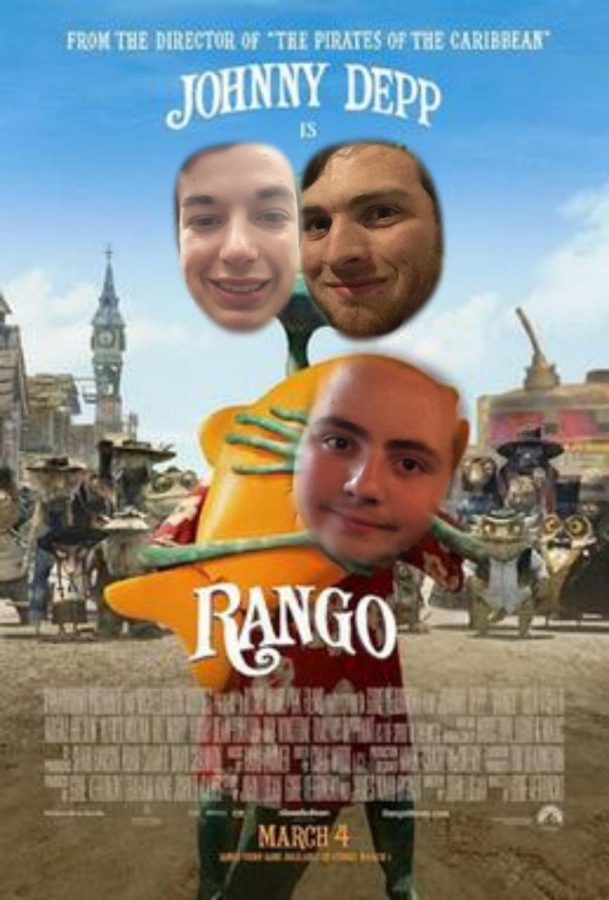 The Animation Heads (Jackson Mershon, Kyle Mershon, and Anthony Saccente) give their thoughts on Rango. Next week’s review will be Rio!

Hey folks, Jackson, Kyle, and Anthony here. And we’re the animation heads! Today we’ll give you our thoughts on Rango.

Rango is a 2011 animated film produced by Nickelodeon Movies and distributed by Paramount Pictures. It was directed by Gore Verbinski, who had previously directed the Pirates of the Caribbean films. The film was both a major critical and commercial success, grossing $245.7 million against a budget of $135 million. At the 84th Academy Awards, the film won Best Animated Feature, making it the first non-Disney or Pixar film to win since 2006’s Happy Feet, and the last one to win until 2018’s Spider-Man: Into the Spider-Verse.

A chameleon (Johnny Depp) who has lived as a sheltered family pet finds himself in the grip of an identity crisis. Rango wonders how to stand out when it is his nature to blend in. When he accidentally winds up in a frontier town called Dirt, he takes the first step on a transformational journey as the town’s new sheriff. Though at first Rango only role-plays, a series of thrilling situations and outrageous encounters forces him to become a real hero.

Rango is a great film with a lot of great features. The story has a great combination of old-fashioned westerns and new-fashioned identity plots. It also mixes some trippy visual elements here and there. So yes, it is a bit of an experience. The titular character starts out as pretty standard, because can grow on the audience pretty quickly with his charisma and charm. Overall, it’s a great watch.

Rango is an 2011 film produced by mister Nick, with an interesting approach to an animated western . . . While having a cast of desert animals. With a wonderful antagonist, and an even better protagonist, Rango is a memorable film . . . Except for the cast. With the exception of the titular character, and RattleSnake Jake, it is hard to remember most of the cast. However, it’s still a wonderful film filled with weird wonderful ideas that were portrayed well.

Rango is a very satisfying animated feature. One of the big reasons why this film is so unique among other animated features is because of its director. Gore Verbinski has a dark style to the majority of films he directs, and that vision shows up here. The characters are designed with a lot of scaly features and disproportionate bodies. The backgrounds are lit darkly and devoid of bright colors. The characters themselves match the tone of the dark visuals. Whenever there is an action scene or a one-on-one confrontation, it feels just as intense on the screen as it would on paper. The story has a great combination of old-fashioned westerns and new-fashioned identity plots. It also mixes some trippy visual elements here and there. So yes, it is a bit of an experience. The titular character starts out as pretty standard, because can grow on the audience pretty quickly with his charisma and charm. In my opinion, the best character is Rattle Snake. He is not in the film for very long, but he is built up to be this threatening presence for the first half of the movie. When he finally shows up, he delivers! His clash with Rango is very intense and sinister, with great dialogue and camerawork. “Hello brother, thirsty?!” That line gets me every time! This is a must-watch for animation lovers. It may not be the best option for the little ones, but serves very well for teens and above.