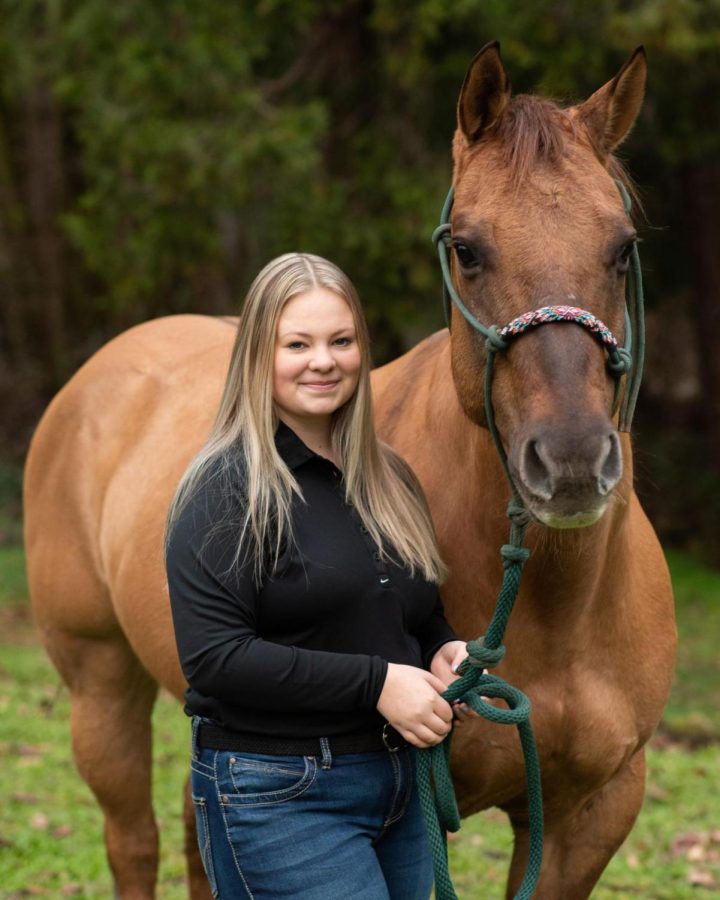 Junior Meagan Harris participated in OHSET before beginning high school, supporting athletes as an eighth-grade groom. “I learned about OHSET in seventh grade and wanted to try competing in a team setting,” says Harris. “Being a groom allowed me to become familiar with OHSET and my future teammates beforehand.”  While equestrians can become an OHSET groom (otherwise known as a non-competing athlete) as early as eighth grade, participating as a non-compete athlete is also an option for high schoolers. Grooms are essential members of any OHSET team, helping competing athletes prepare for their events by cleaning and tacking up their horses when they are in a rush or unable to themselves. At a horse show where events requiring completely different equipment are frequently scheduled back-to-back, this happens more often than one might expect! Non-competing athletes ensure riders are always prepared and on time at meets. They also assist with cleaning stalls and feeding both horses and athletes. Like competing athletes, they must attend monthly business meetings, participate in fundraisers, and are assigned athlete numbers. They are also permitted to ride in team practice. Now, Meagan is a star competing athlete, earning the fastest gaming times of anyone on the team with her horse Coors. She also qualified for state in more events than any other Wilsonville athlete. For Meagan, being a part of OHSET is all about doing what she loves with a team of other passionate people. “I love that all of the teams are nice to each other, and you can be friends with and cheer for people on other teams,” she explained. Meagan’s relationship with West Linn athlete Kaylee Lindstrom is proof of this. When Kaylee filled the empty spot on the drill team, long practices and mandatory teamwork led to a new friendship. The two grew very close and helped coach each other in gaming events. Even though the drill team recently disbanded at the end of the season, Harris and Lindstrom continue to spend time together (when not on the back of a horse).