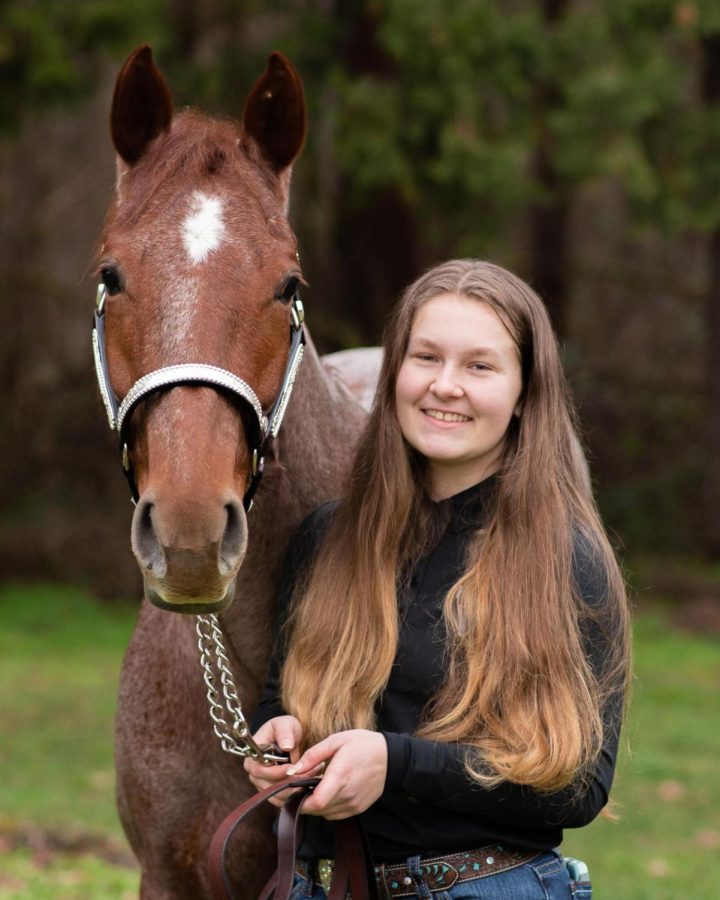 Freshman Kaitlyn Widener, who has been riding since she was four, pointed to the team’s small size compared to years prior. “I haven’t had experience having a large team, as this is my first year. However, I thought it was nice to have a small team. I feel like we create closer connections with all of our teammates with a small team. Having a small team does limit our ability to participate in team events, though.” In OHSET, team events require either two (bi-rangle, working pairs, sorting), four (Canadian flags, versatility, in-hand obstacle relay race, drill team–working fours), or more (drill team–5+) athletes to ride together. When Wilsonville athletes selected their events at the beginning of the year, an insufficient number were interested in participating on the drill team. Thankfully, WHS equestrian was given permission to join forces with West Linn’s team–which had acquired only two athletes–so everyone who wanted to could participate! Like Grace, Kaitlyn is also a member of a 4-H horse club and contrasts the two programs. “I like that OHSET athletes are all similar ages and get along well. In 4-H, we’re all very different ages and tend to only hang out with people in our age group,” says Widener. “I was surprised by how gracious and helpful OHSET members are. Kaitlyn said she wants anyone interested in joining to know that it’s possible to participate with a younger horse. “Lana doesn’t have that much experience, and we’re still alive! All people can do it, all horses can do it, and everyone is welcome.” With eighteen individual events (including saddle seat, driving, and plenty of in-hand options) and nine team events, there really is something for everyone in OHSET.