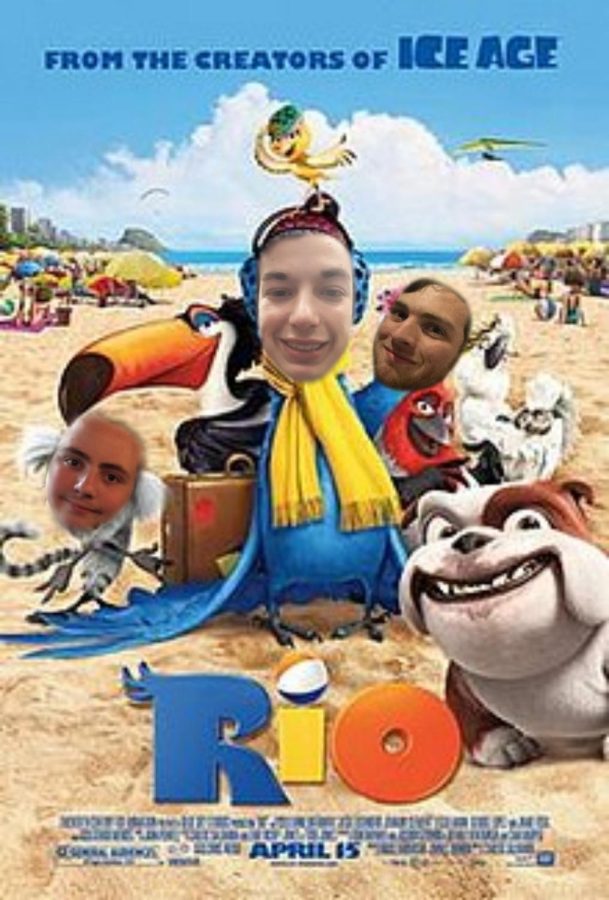 The Animation Heads (Jackson Mershon, Kyle Mershon, and Anthony Saccente) give their thoughts on Rio. Next week’s review will be Over the Hedge!

Hey folks, Jackson, Kyle, and Anthony here. And we’re the animation heads! Today we’ll give you our thoughts on Rio.

Rio is a 2011 animated film produced by Blue Sky Studios and 20th Century Fox Animation. The film was a box office success, grossing over $143 million in the United States and $484 million worldwide. The film was nominated for Best Original Song for the song “Real in Rio” at the 84th Academy Awards, but lost to the other nominee, “Man or Muppet” from The Muppets. A sequel, Rio 2, was released on April 11, 2014.

Captured by smugglers when he was just a hatchling, a macaw named Blu (Lorànt Deutsch) never learned to fly but has a happy domesticated life in Minnesota with Linda (Élisabeth Ventura), who thinks he is the last of his breed.

Rio stands as one of Blue Sky’s greatest films. An innocent flick with wholesome, family friendly messages, beautiful animation, and a creative and fun soundtrack. Colorful characters and a fun story, it’s a modern classic.

Rio is a film made in 2011, as a fun family film with some interesting characters. The protagonist Blue has an intriguing character study of thinking he belonged in one place, while in reality, by the end of the film, he found belonging in an opposite environment. The growth of his character in relationship with his romance with Jewel is executed well. However, the concept is not without its flaws. With a strikingly obvious symbolism of the chain connected to their feet that drives the film, I feel as if there could have been more creative ways to have them stay together. However, the chain still works for the plot, although it shows Jewel and Blue’s duty to be the only blue macaws, and therefore they are, in a way, tied on the same chain.  However, the antagonist, Nigel, is an amazing parallel to Blue. While ue was taken from where he belonged at a young age, Nigel was taken from where he belonged at the prime of his life, so not only did he remember his pain, he was REPLACED with another bird, making him bitter and cruel. While Blue was simply taken out of his environment and was placed somere where he was loved and spoiled, just like Nigel was, meaning that, in a way, he could have ended up like him . . . If he never met Jewel. In my opinion, Jewels character study is almost the same as Blues, except that she was taken from her home like Nigel was, but she was taken the same way blue was. In a way, if Nigel and Blue were one person, that would be Jewel. I think it is clear by now that I love the Bird cast of Rio, however, I don’t even think that the B plot is worth talking about. The humans hold some parallels to their bird counterparts, but other than that, they are just on a wild goose chase for the main cast for the entire film. Yes, the A plot is much better than the B plot, but the A has too many forgettable characters in my opinion. While I do remember the humorous birds, I cannot remember them having any other character than wanting to help the Blue Macaws, or wanting to harm them. These two things are the only things docking the film.

Rio is the definition of a solid summer animated film. It has the basic ingredients to be fun for the whole family. It has a story that is very easy to follow. It has added emotional depth with Linda trying to find Blu and their connection with each other. The animation is wonderful. It is bright, colorful, and full of visual flair. The character designs are very detailed, and their movements are on point. The characters are well developed and are very intriguing to the audience. There is a good mix of characters with arcs and comedy relief. And Real in Rio is so dang catchy. Overall, this is a film I am excited to watch all throughout the summer months. A great film to watch right after graduation.