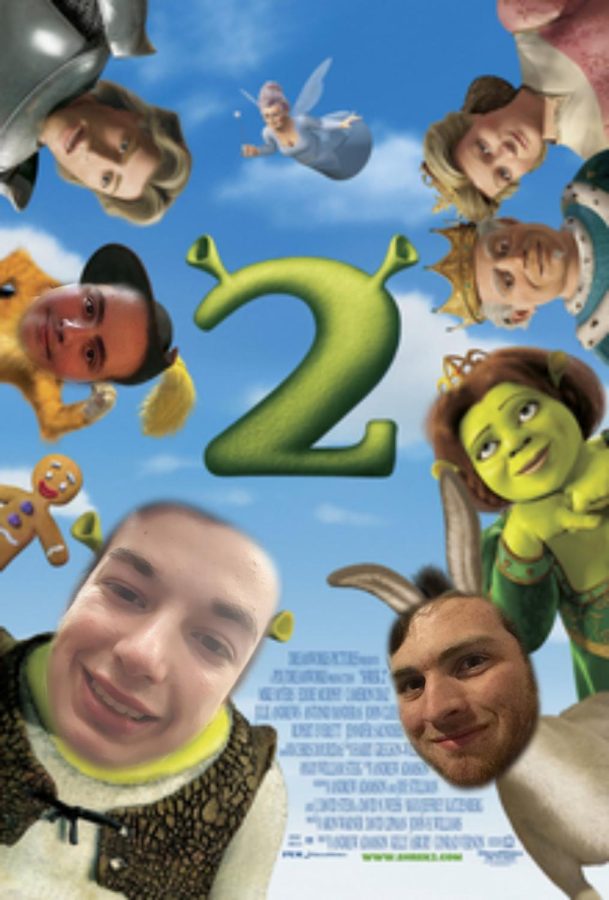 Hey folks, Jackson, Kyle, and Anthony here. And we’re the animation heads! Today we’ll give you our thoughts on Shrek 2.

Shrek 2 is a 2004 animated film produced by DreamWorks Animation. It is the sequel to Shrek (2001) and the second installment in the Shrek film franchise. Met with highly favorable reviews like its predecessor, the film grossed US$928.7 million worldwide. It scored the second-largest three-day opening weekend in U.S. history and the largest opening for an animated film at the time of its release. It went on to become the highest-grossing film of 2004 worldwide. Shrek 2 is also DreamWorks Animation’s most successful film to date, and it held the title of being the highest-grossing animated film of all time worldwide until Toy Story 3 surpassed it in 2010. The film received two Academy Award nominations for Best Animated Feature and Best Original Song.

After returning from their honeymoon and showing home movies to their friends, Shrek and Fiona learn that her parents have heard that she has married her true love and wish to invite him to their kingdom, called Far Far Away. The catch is: Fiona’s parents are unaware of the curse that struck their daughter and have assumed she married Prince Charming, not a 700-pound ogre with horrible hygiene and a talking donkey pal.

Shrek 2 is argued to be one of the greatest animated sequels. And that doesn’t go without merit. Dreamworks sequel does virtually everything a good sequel should do: take what was great about the first film, and expand and escalate them in a positive and interesting way. And I’d say for the most part, Shrek 2 succeeds in just that. With Shrek and Fiona both gaining a new phase in their character studies, a new side character that brings a lot of chemistry, and a highly praised antagonist. The humor is wittier and more dry, and the animation far more refined. Despite a slightly convoluted plot line and less narrative nuance, Shrek 2 stands itself as a strong follow-up.

Shrek Two is a movie that is an excellent sequel to the hit film Shrek. Amazing sequels are hard to find, and even harder to arguably surpass the original. With surpassing the sequel curse of ignoring the first film, and also ten wrong the character study’s from the first film, Shrek two holds no I’ll will for “just being a sequel”. Now, on to the film itself. Shrek two does an outstanding job of keeping a wonderful ensemble cast, even introducing new lovable characters who would get their own movies. Although, I have a few words for the creators about that “Kyle” character. But besides that, the balance between characters(most notably) like Fiona, donkey, puss, and the king of Far Far Away is near impeccable. Now, as fabulous as that is, there is a topic I need to address. The Antagonist. That’s right, the fairy godmother. While she has an amazing presence on screen and an impressive human aside from her son and her “diet”, it seems like she is only evil to Shrek for the sake of having to be an antagonist. And on top of that, she holds little parallel to Shrek besides both of their desires for what they think is best for Fiona, for her happily ever after. Also, a plot hole that drives me insane. The Muffin Man was supposed to be in Dulock, not Far Far Away. Sure, Shrek and Co could have gone back to Duloc to make the gingerbread giant, but, how on EARTH would they make that entire montage trip in barely a half hour’s time? It makes no sense. But I do love its amazing power of Shrek 2 being a good sequel, but there is just that little stuff that annoys me.

This is one of the best films DreamWorks Animation has ever produced! It is also one of the best animated sequels out there! This film has the total package. It has an action-packed story full of twists and turns. The characters are familiar from the first Shrek film. But not only do they stay beloved, but the film is able to expand upon the returning characters as well as introduce bew ones. You have Shrek, Donkey, Fiona, Puss n’ Boots, Fairy Godmother among others. And they are all engaging. The animation is also really well done. The world of Far Far Away is very imaginative and the visuals do no disservice to the concept. The character expressions are always on par, making for a lot of funny reactions especially during the dialogue scenes. My favorite scene in the whole movie has to be the I need a Hero scene. It’s where Fairy Godmother is singing the titular song while Shrek and the gang are out to save Fiona before Prince Charming gives her the everlasting kiss. It is fun, thrilling, and the song is perfectly synced up with the action. Overall, this is an animated classic most recommended for the entire family. Sit down and enjoy!