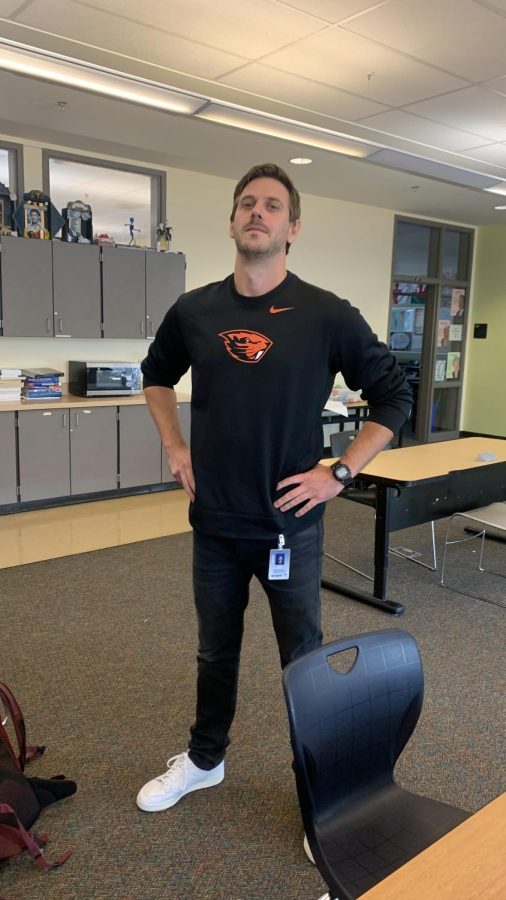 Mr. Baker poses for a picture. As a sub, he works in a variety of classrooms around the school.

Since the pandemic hit, teachers have constantly been in and out of the classroom. This greater demand has led to a shortage of substitutes, which is why we have Mr. Baker as our permanent sub. He’s definitely not new here– as we’ve transitioned back from online learning, he’s been subbing all over the school. He’s really enjoyed subbing for a different class everyday because he gets to know so many students.

Mr. Baker originally went to college pursuing a math degree, thinking he wanted to be an engineer. When he realized that would mean sitting behind a desk and computer all day, he shifted his goals. He decided to alter his path in college, and began to study music as well; both of his parents were music teachers, so he grew up with a deeper interest in it. Since then, he’s been teaching for 7 years. He taught as a music teacher in Coos Bay— only one of two in the whole district! After a year, he moved back to Portland to teach math at Rex Putnam, his old high school.

He began teaching right out of college, but after a while, he decided to take a few years off to travel. He noted, “your life shouldn’t just be about work.”  For three years, he traveled around the US, Europe, and Vietnam. Aside from traveling, he likes to read. One of his goals for the year is to read 10 books! He also wants to win his fantasy football league. Another goal of Baker’s is to learn as many students’ names as possible, so if you see him in the halls, or have him as a sub, make sure you say hi and introduce yourself!