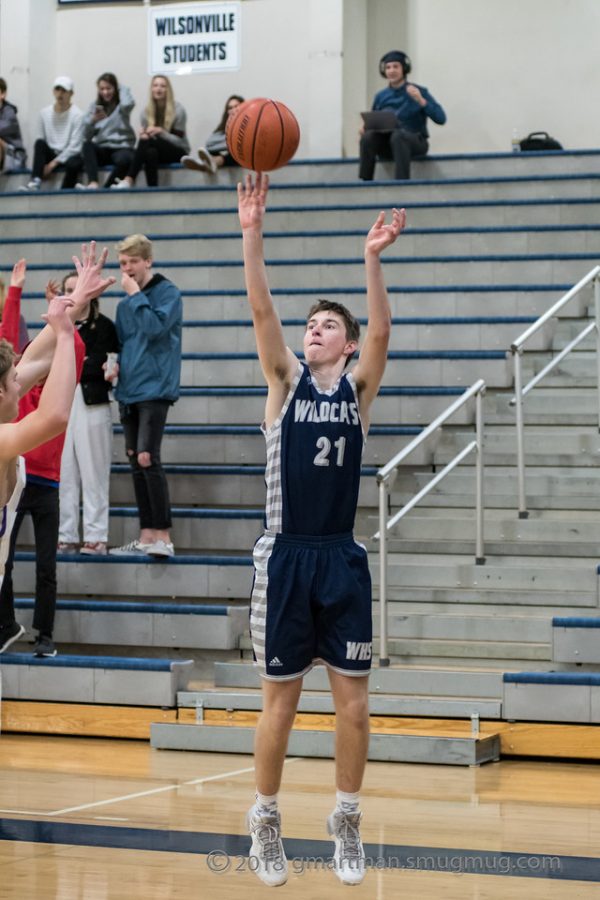 Andrew Classen shoots the 3 from the corner

On Friday, November 30th, the boys basketball team of Wilsonville High School had their first game of the season against the Ridgeview Ravens. The game was the first of the 2018-2019 season and a part of the Holiday Inn Wilsonville Invitational. The Wildcats led the game from beginning to end destroying the Ravens 103-43.

The ‘Cats domination was due to notable stellar performances by seniors Nolan Thebiay and Jack Roche in which each of them had a double double. Thiebe paced the ‘Cats with his energy tallying 12 points and 11 rebounds while Roche was his usual dominant self with 26 points and 18 assists. Roche’s 18 assists is an all-time record at Wilsonville High School breaking the previous record of 14.

In addition, all 10 players who played in the game ended up scoring at least 5 points, so all players contributed to the win. When asking junior wing Andrew Classen about the game, he said, “Everyone played together and it was fun to see everyone cheering each other on.”

Then, on Saturday the Cats were victorious again this time against the Eagle Point Eagles 78-36.  Finally, in the championship of the WIT, the ‘Cats defeated the Cougars of Mountain View 57-45 due to amazing defense and effort throughout the game. Next up for the Wildcats is a home game December 14th versus rival West Linn.