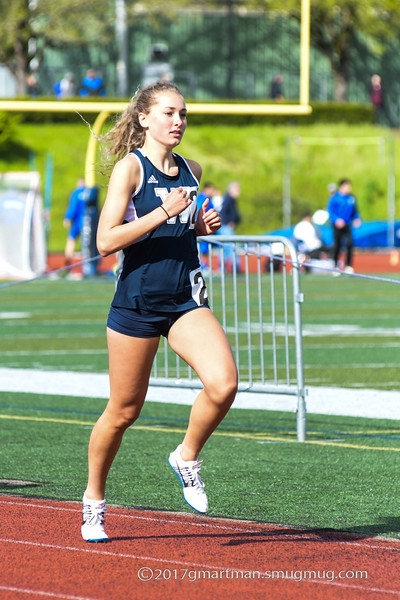 Junior Sam Prusse running a 1500 meter race. Prusse won both the 800 and 1500 on Wednesday evening against La Salle.

Wildcats go the distance against the Falcons

On Wednesday, the Wilsonville Wildcats hosted La Salle Prep in the first league meet of the year. Being a dual meet with fewer athletes than, say, an invitational, many races had few heats, with not every lane filled. Nevertheless, the competition level was high and many great results were achieved.

Wilsonville swept the meet, winning the overall team competition for both varsity and JV on the girls and boys sides. This is familiar territory for the Wildcats, who have proven successful in the past handful of seasons, winning the NWOC district meet year after year.

The distance races, as always, were a highlight for the Wildcats. Junior Sam Prusse won the 800-meter dash by a considerable margin, running a 2:30 time with the second place athlete finishing at 2:43. Prusse ran an outstanding 1500 meter race as well, winning by thirty seconds with a time of 4:54. Her younger sister, Gabby Prusse, placed second in the 1500 with a time of 5:24. In the girls 3000 meter rase, senior Kaitlyn Dougall placed first with a season record 11:58 run.

On the boys’ side, Wilsonville won two of the three long-distance events. The story of the night was the friendly competition between senior Jack Burns and sophomore Sebastian Pinger. In the 800 meter dash, the two boys placed second and third in a too-close-to-call finish. Pinger ran a 2:12.64 and Burns came in right behind him at 2:12.97. In the 1500 meter run, Burns won with a 4:22.39, while Pinger placed second with a time of 4:27.24. After the meet, Burns reflected on the close finishes and praised Pinger for always pushing him to become a better runner and being the “younger brother I never had.”

Wilsonville was successful in other events as well, winning the boys long jump, discus, javelin, and shot put, among others. Senior Mike Church had an impressive evening, posting a PR in both the shot put and javelin. The girls won the pole vault, shot put, and the 100m hurdles.

At the end of the night, the Wildcats pulled ahead because of their strength and depth in the distance events. With a lot of season left to experience, there is plenty to look forward to both in league competition and beyond.