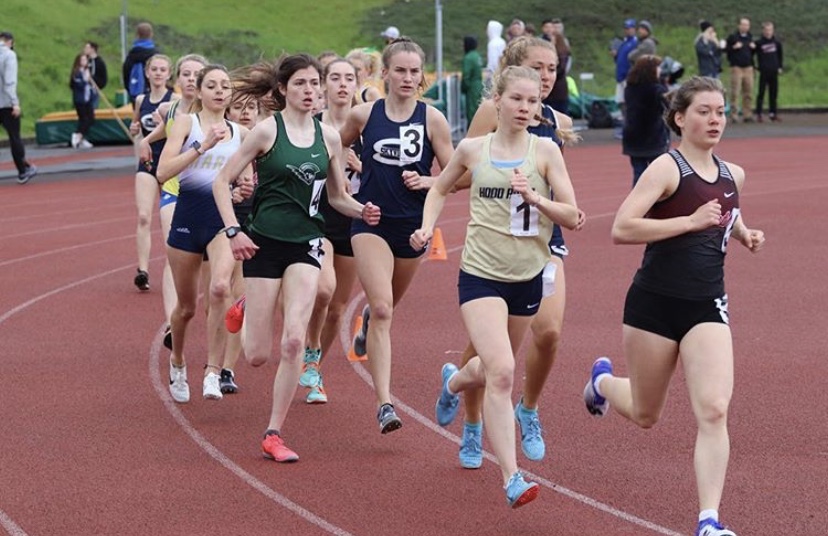 The girls 1500 meter race at the annual Wilsonville Invitational on Saturday. Wilsonville junior Sam Prusse finished second in this event, and third in the 800 meters. Photo credit: @nikeportlandxc on Instagram.

On Saturday, Wilsonville hosted their annual invitational meet, inviting 25 teams to participate. The boys managed to finish tenth overall, and the girls placed twelfth, which is impressive considering the quantity and quality of track powerhouses and 6A teams in attendance.

West Salem absolutely dominated on the girls side, finishing with 117.5 points, while the runner up Benson secured 77 points. Tualatin had the overall highest team score for the boys, with an outstanding 128 points; second place Willamette only had 52 at the end of the day.

Tualatin found a significant number of their points in the men’s 100 meters, finishing first and second. Senior Kwabena Lynn ran a blazing 10.72 and senior Dominique Loggins came in close behind with a 10.87. In an invitational that awards points to the top eight athletes in each event, winning first and second in a single race is a massive feat which rakes in 18 points for the team.

Lynn also ran an personal best 21.81 in the 200 meters, but that was only enough for second place, as he was edged out – unsurprisingly – by phenom Micah Williams from Benson. Williams, a U-20 gold medalist, holds the meet record in the 100 meters, but didn’t run that race on Saturday. Instead, he ran the 200 and 400, easily emerging victorious in both.

While the Wildcats don’t have any athletes with the prowess of Micah Williams, they still posted some impressive marks on Saturday, benefitting from the high level of competition.

Freshman Ben McClelland ran a personal best 9:37.45 in the 3000 meters, which was fast enough for twelfth place in a field of twenty – mostly upperclassmen – runners. In the early morning session of the 3000 meters, sophomore Caleb Yaso placed eighth with a new PR of 9:53.33.

Tied for the second best finish of any Wildcat was freshman Rocco Marshall, who snagged third place in the long jump. Marshall jumped a personal best 20’ 6.75”.

Prusse was the athlete who scored the most points for the Wildcats, as she secured second place and third place in her two individual events. Her third place finish was in the aforementioned 800 meters, and she finished second in the 1500 meters with a PR of 4:50.82. The winner in the girls 1500, Frances Dickinson of Hood River Valley, ran a 4:50.00, only 0.82 seconds quicker.

Freshman Gabby Prusse nearly broke five minutes in the 1500 meters, with a new best time of 5:00.73. The girls 1500 meters race was one of the most competitive and well-run events of the day, with 17 of the top 20 finishers achieving a new PR.

Just like the boys, the girls had a great day in the throwing events. Sophomore Madison Jones finished seventh in the discus with a throw of 105’ 2”. In the javelin, senior Delaney Dougherty threw 120 feet even, which earned another seventh place finish for the Wildcats.

As always, the Wilsonville Invitational was an exciting meet for everyone involved. Plenty of impressive times and personal bests were achieved by athletes from each and every school. With districts less than a month away, meets like this are extremely important for the Wildcats in terms of facing real competition and preparing – hopefully – for the state championships in May.