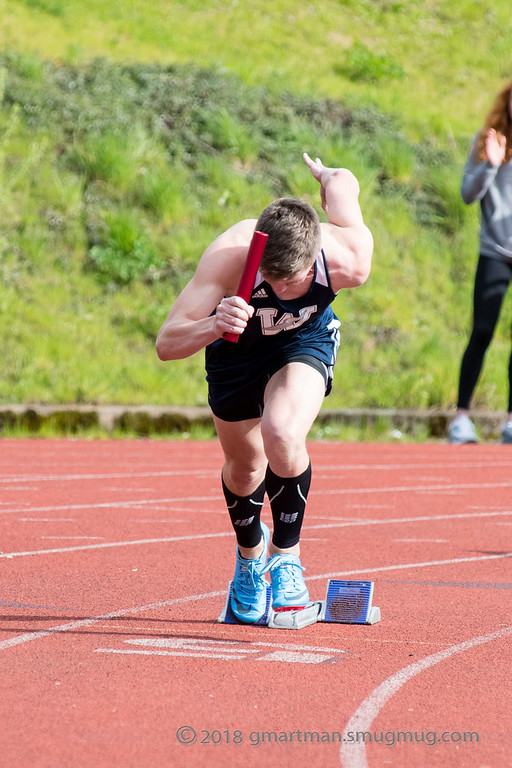 Payton Dart comes out of the blocks in the 4×100 meter relay. Dart anchored the 4×400 team on Wednesday and managed to secure the win in an exciting and down-to-the-wire race.

On Wednesday evening, the Wildcats hosted their last home meet of the season. The Rex Putnam Kingsmen and the Parkrose Broncos came to compete, and Wilsonville easily handled both teams.

The Wildcats dominated all around: out-throwing, out-jumping, and outrunning both teams in almost every event. As always, plenty of PRs were recorded and the team continued to push towards the final stretch of the season before districts.

The most exciting event of the night was definitely the boy’s varsity 4×400 meter relay. With each school entering one team, it was bound to be a showdown. As they rounded the last curve and headed for the final 100 meters, all three anchor legs were neck and neck. Sophomore Payton Dart was Wilsonville’s last runner, and he managed to sneak past Parkrose and Putnam to win the race in the last few steps. The team finished with a time of 3:42.31, while Parkrose was close behind with a 3:42.65 and Putnam placed third, coming in at 3:42.71.

In nearly all the other events, though, Wilsonville came out on top with decisive victories. Senior Jillian Greene won the 400-meter dash by more than five seconds, finishing in an impressive 1:03.06. Greene also anchored the girls 4×400 team and gave the Wildcats a thirteen-second victory over Putnam.

Junior Sam Prusse shined as always, this time in the 3000 meters. Prusse won the event with a personal best 10:42.91, which was more than thirty seconds faster than the second place athlete.

The girls continued their rout of the competition in both hurdling events, with junior Kylee Rusher winning the 100-meter hurdles and sophomore Carly Shanklin coming in first in the 300-meter hurdles. Rusher also won the high jump with a height of 4’8”.

Senior Kellie Yoshida had an outstanding meet, PRing in both the long jump and the triple jump. She placed second in the long jump with a mark of 15’ 9.75”, and won the triple with a distance of 33’ 4”.

On the boys’ side, Parkrose did well in the distance events but was not a match for Wilsonville in any other area. Brothers Ahmed and Abdi Ibrahim from Parkrose finished first and second in the 3000 meters, but senior Jack Burns and sophomore Sebastian Pinger were close behind, coming in at third and fourth, respectively.

Ahmed Ibrahim won the 800 meters as well, but Wilsonville senior Trevor Johnson was right on his tail, finishing only a second behind him and recording a season record in the process.

The team of Rocco Marshall, Henrey Tellez, Payton Dart, and Jonah Gomez won the men’s 4×100 meter relay for the Wildcats with a time of 44.91.

Senior Mike Church won both shot put and javelin, while sophomore Jake Moore PRed in the discus and won the event with a throw of 141’ 4.5”.

Freshman Cooper Becklin jumped for the first time this season on Wednesday, and ended up winning the high jump with a height of 5’11”. In the men’s pole vault, freshman Luke Nelson placed first and set his new personal best, clearing 10’6”.

All in all, the Wildcats put on another impressive meet and came away with yet another league victory. With only two weeks left until districts, the team is locked in and ready to compete for a chance to go to state.