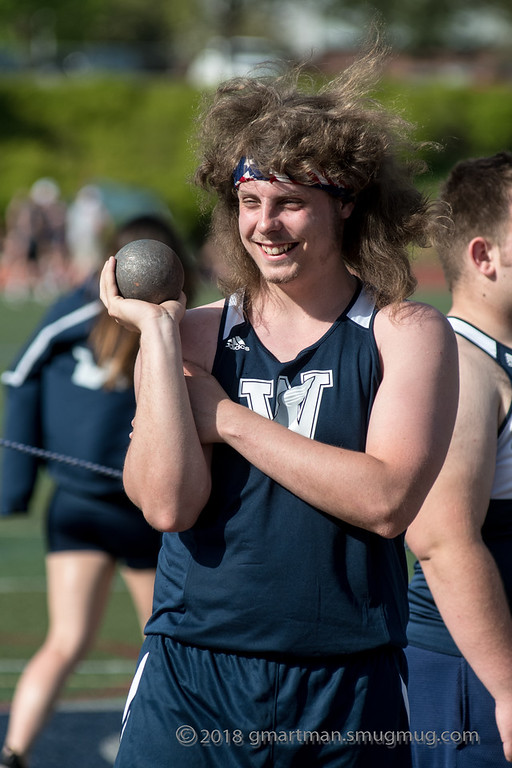 Senior Mike Church during shotput. Church won both shotput and javelin on Wednesday at La Salle.

Nonetheless, the Wildcats were impressive. It was a beautiful day for a track meet, with the sun shining and morale high all around. Hot weather is particularly good for jumpers, who shined in this meet.

Senior Kellie Yoshida jumped an impressive 33’ in the triple jump, and sophomore Sydney Burns PRed with a distance of 30’ 7.25”. Yoshida jumped 15’ 4” in the long jump as well, placing third in the event.

The boys did well in the high jump, with freshman Cooper Becklin jumping 5’8” and Kellen Hartford clearing 5’6”. Hartford recorded a new PR in the triple jump with a mark of 38’ 10.5”, and sophomore Kyle Lam placed second with a mark of 37’ 10.25”.

Aside from the jumps, Wilsonville did well – as always – in the distance races. Sophomore Gabby Prusse won the girls 3000, while Sam Prusse won the 800-meter race. On the boys side, senior Jack Burns won the 1500 meters and freshman Ben McClelland placed first in the 800.

In the 100 meter dash, sophomore Payton Dart finished first and senior Gabe Pernisco placed second. Dart also led the 4 by 100 team to a victory, with a time of 45.12.

Next up on the schedule for the Wildcats is the Nike Jesuit Twilight Relays on Friday afternoon. The highly selective and competitive competition always draws in schools from near and far, and the team is excited to race some unique events like the 4 by 800 meter relay.

Next week is the last league meet against the Hillsboro Spartans at Hare Field. Both the boys and girls teams have gone 6-0 in league competition, and are looking to secure the district on Tuesday.

Following that meet, JV districts are next Friday afternoon at St. Helens High School. Finally, the season closes out for most on Thursday, May 16th and Friday, May 17th at Rex Putnam for the NWOC District Championships.

Wilsonville is looking to win another district title this year, and hopefully send a lot of athletes to the state meet. We’re coming down to the final stretch of the season, and the Wildcats are sprinting towards the finish line.