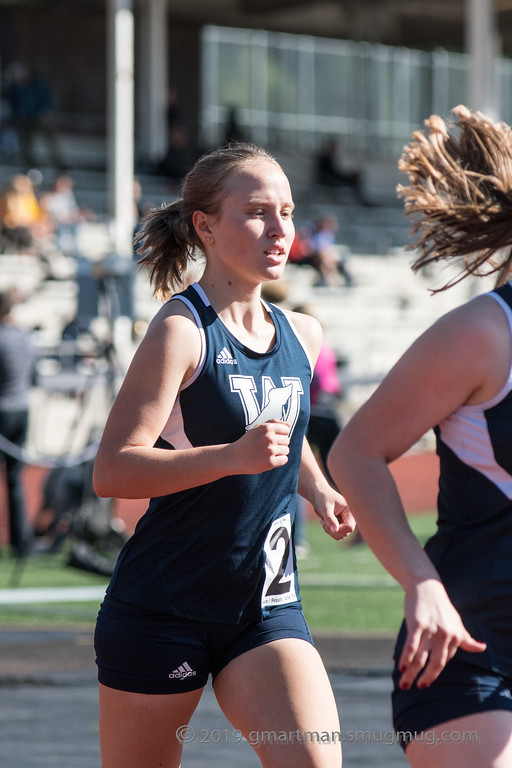 Sophomore Aurora Barkley running a long distance race. Barkley won both the 1500 and 3000 meter races on Tuesday against Hillsboro.

On a blazing Tuesday afternoon, the Wildcats traveled to Hare Field to take on the Hillsboro Spartans in the final league matchup of the season. Coming into the meet, both Hillsboro and Wilsonville were undefeated in league on the girls and boys sides.

The Wildcats managed to pull out the victory on both sides, winning by a narrow three-point margin in the girls competition. The boys won by a more considerable amount, but it was still a tight race; the final score was 85-60.

The difference came in the jumping events. Freshman Kellen Hartford had an outstanding meet, and he won the high jump, long jump, and triple jump. In both long and triple, Hartford set a new PR, while he tied his personal best in the high jump with a height of 5’10”.

Freshman Rocco Marshall tied Hartford for first place in the long jump with both athletes jumping 19’ 9”.

For the girls, senior Kellie Yoshida placed third in the triple jump and first in the long jump with a distance of 15’ 6.25”.

Aside from the jumps, Wilsonville also found success on the track. Marshall achieved a new PR in the 100-meter dash and won the race with a time of 11.51 seconds. Junior Haley Stahl placed second in the 200 meters, running a 27.94. In the girls 400, Wilsonville secured both first place and second place, with senior Jillian Greene winning the event and junior Sam Prusse coming in close behind.

The Wilsonville girls continued their dominance in the distance races by sweeping the 1500 meters. Sophomore Aurora Barkley won the event, while freshman Gabby Prusse and junior Keira Bertell came in second and third, respectively. Barkley also won the 3000 meters with a time of 12:34.53.

For the boys, senior Trevor Johnson won the 800 meters. Senior Jack Burns won the 1500 meter race, with sophomore Sebastian Pinger placing second. The McClelland twins destroyed the 3000-meter race, with Jacob setting a new PR of 9:36.88 and Ben coming in second with a time of 9:43.21.

As per usual, the Wildcats outhrew the competition as well. Senior Mike Church won the shot put and javelin, while senior Nehemiah Barkley placed first in the discus. For the girls, senior Lauren LaFreniere won the shot put with a throw of 34’ 2”. The Wildcats swept the javelin, with senior Delaney Dougherty winning the event to round out the victory.

The team is hoping to secure the league title, and the odds are in their favor. After districts, all eyes are on the state championship meet, which will hopefully feature a number of Wilsonville athletes.