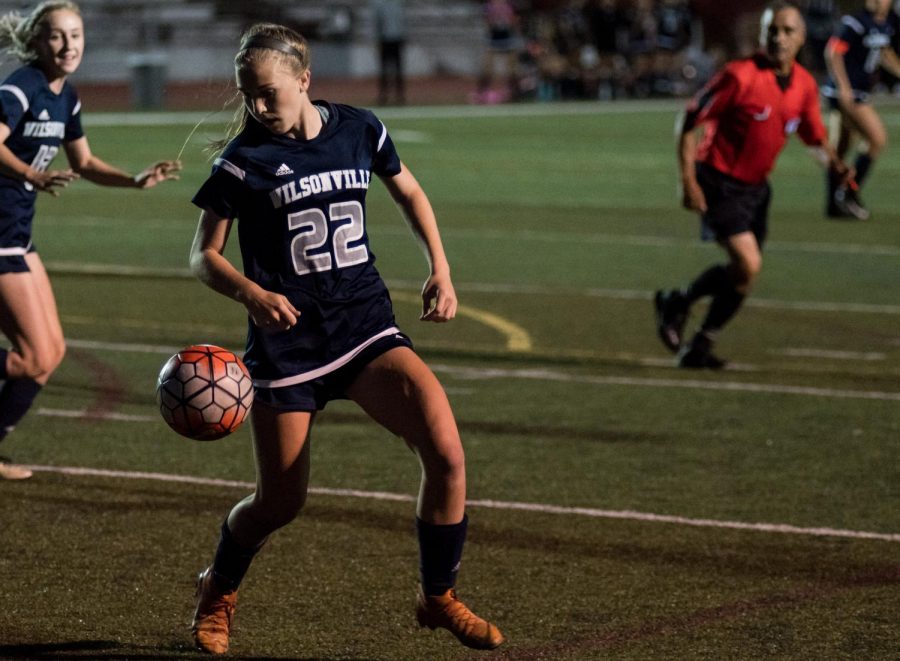 Sophomore Lindsey Antonson had a hat trick on Tuesday evening in the Wildcats' first game against Bend.

On Tuesday afternoon, the girls soccer team took off during lunch, mentally preparing for their upcoming four hour drive to Bend. In the first pre-season game of the year, the Wildcats took on the mighty Lava Bears and fell 4-3 to the 6A team.

Bend is currently atop the leaderboard in the Mountain Valley Conference and already ranked second in the state by OSAA. They put up eight goals in a rout of Ridgeview on August 29th, just four days before their hard-earned victory against the Wildcats.

Coming into the game, Wilsonville knew they would have their work cut out for them. Last year Bend came into town on the first day of school and took down the Wildcats 6-2 to open what would be an incredibly difficult preseason.

The expectation was that it would be an intense game, and that was certainly the case. The Lava Bears opened the game with a strong first half, scoring two goals quickly and ending the half up 3-1 after sophomore Lindsey Antonson managed to pull one back for the Wildcats.

The second half was a different story, and Wilsonville managed to “win” the half 2-1. Antonson completed her hat trick with two crafty goals to tie up the game, but Bend netted a quick goal in response to regain and ultimately secure their lead.

When asked how she was able to find success in the game, Antonson immediately credited her teammates, “They were able to find me with good through balls.”

The team was certainly successful on the offensive end, and there’s a lot of positives to take away from this performance. According to sophomore Karina Borgen, “We played well but we still have some kinks to work through in order for the season to be successful.”

In the eyes of the players, a successful season means a second consecutive league championship. Sophomore Katelyn McDougal has even bigger dreams, saying, “Our goal for the season is to work hard in practice and in games, and to ultimately win state.”

Even though they opened the season with a loss, the Wildcats have the potential for a great season. Coach Dwight Sheppick suggested that the team has the talent and the ability to be his greatest ever. Their next game is a non-league contest on Friday, September 5th against West Salem at 4:00 PM at home.