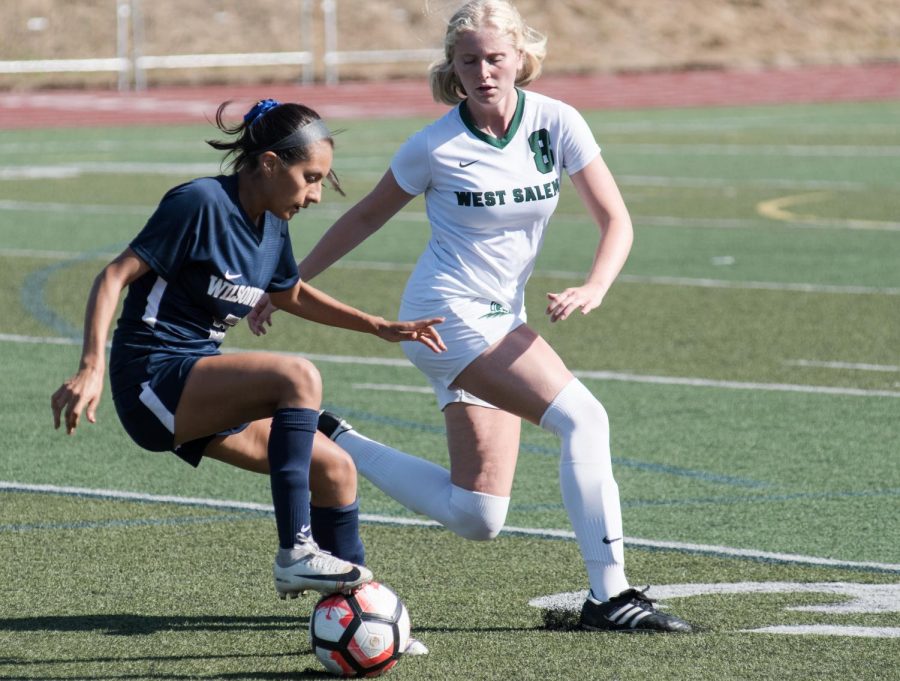 Wildcats find first win of the season against West Albany

After a thirty-minute delay prompted by the third official’s late arrival, the Wilsonville Wildcats game against the West Albany Bulldogs kicked off at 7:30. After suffering two losses against Bend and West Salem, the Wildcats were hungry for a win.

Sophomore Lindsey Antonson was a man on a mission from the beginning of the game, bagging two quick goals early on to put the Wildcats ahead 2-0 at half.

The second half saw an onslaught of goals from Wilsonville, with Antonson completing her hat trick early. Senior Araxi Martinez, who played out of her natural position all night, netted two goals after dancing through the defense.

Senior Haley Stahl got her first goal of the season after finishing a beautiful cross from senior midfielder Camryn Pettenger-Willey. West Albany got one goal back to cut the deficit to 5, and the final score was 6-1.

The Wildcats were able to find success, even though they were short-handed. Senior starting forward Renee Lee was out sick, so the starting lineup had to be shifted. Senior captain Kylie Aube was out as well due to a quad injury picked up in Friday’s match against West Salem, so the backline was changed up too. Freshman Cassie Wedin started in her place, while sophomore Annika Jenson stepped into the midfield as Martinez moved forward to replace Lee in the attack.

Having Martinez and Antonson together up top proved to be too much for the West Albany defense, who couldn’t handle their crafty footwork or speed going forward. According to senior defender Sydney Carskadon, the lineup changes helped the team find success. “Putting Araxi as a forward instead of a midfielder opened up a lot of opportunities for our team and created challenges for the opposition.”

Carskadon also credited sophomore centerback Katelyn McDougal for her performance, saying that she saved the team multiple times and covered well for her fellow defenders.

Aube echoed her sentiments and pointed out the depth of the team as a strength going forward. “Quite a few players stepped up and came through for the team. Camryn showed some real grit and had a beautiful assist to Haley.”

With the first win of the season behind them, the Wildcats are looking ahead to Thursday’s match against last year’s state champions, Crescent Valley. It should be a tough matchup, especially considering the Wildcats were knocked out of the playoffs by the Raiders last season.