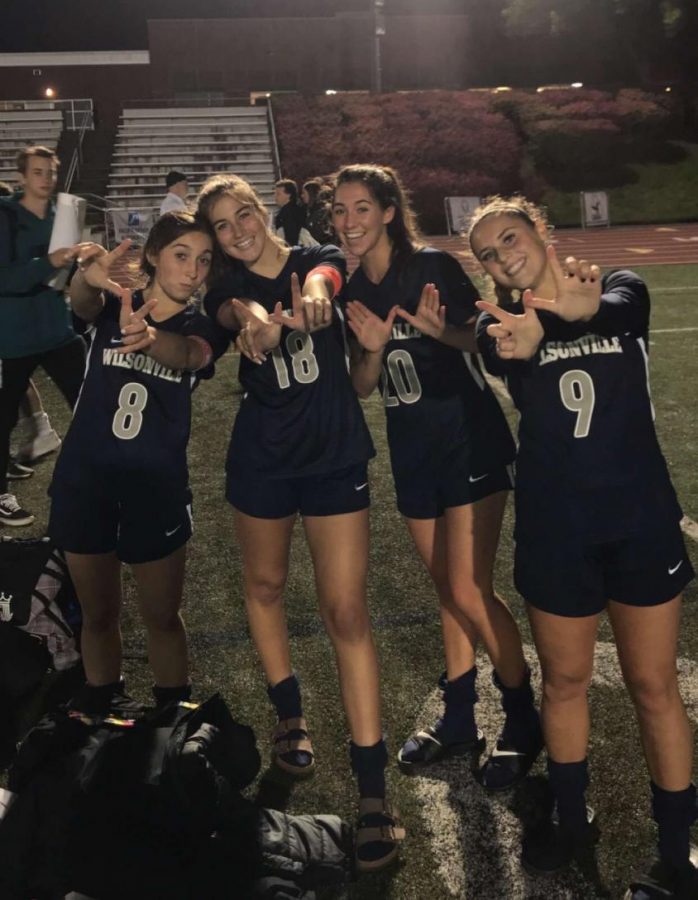 The Wildcats poured it on against the 6A team, beating the Cougars 5-3.

Everyone knew it was going to be a battle.

Before this season started, Wilsonville tied Canby 0-0 in a scrimmage on the Cougars’ home turf. The Wildcats were left unsatisfied with that result and circled tonight’s game on the calendar as a chance to prove themselves as the better team.

The Wildcats were coming off a big draw against Lincoln 2-2, in which they showed better pace and control on the ball than they have yet this season. They were hoping to carry the momentum through this game and come up with a big result.

And in a predictably high scoring game with stunning performances by both teams’ star forwards, Wilsonville managed to do just that. Sophomore forward Lindsey Antonson bagged her fourth hat trick of the season, and Canby’s sophomore star Joey Baguio put three of her own on the board as well.

The Cougars opened the scoring when Baguio got out on a breakaway and demonstrated her incredible speed, slotting a driven ball past senior keeper Kendall Taylor. Antonson responded quickly to tie the game up 1-1, and it was obvious from that point on that the game was going to be a close one.

Ten minutes later, Antonson took control and dribbled through the entire Canby midfield and defense before taking a shot which hit the bottom of the crossbar and bounced into the net.

With the clock winding down, it looked like Wilsonville was going to take a 2-1 lead into halftime. However, Canby sent one last long ball forward for Baguio, who managed to outrun the defense and find the left corner of the goal with 3.4 seconds remaining. The Wildcats headed into halftime even with the Cougars at two goals apiece.

Head coach Dwight Sheppick made the decision to move Antonson out wide and slide senior Renee Lee into the center forward position to give the sophomore more room to work. The shift paid off early in the second half, as Antonson sent a ball across the goal that Lee managed to slam into the back of the net, giving the Wildcats a 3-2 lead.

Uncomfortable with such a close score, Wilsonville was determined to extend their lead. Antonson came up big again, receiving the ball with her back to the goal and turning to shoot around her defender all in one motion, which resulted in her third goal of the night.

With a two-goal lead and three minutes left, the Wildcats were feeling confident until Taylor tripped up Baguio in a one v one and was awarded a yellow card. Due to OSAA rules, Taylor had to come off for the play and senior captain Camryn Pettenger-Willey stepped into the goal as Baguio set up her PK. The Canby sophomore slotted the ball into the left corner, just out of the reach of Pettenger-Willey.

Only up by one goal, Wilsonville came tearing down the field in a counterattack and sent the ball out wide to senior forward Haley Stahl. Even though she was playing on the left side instead of her usual right, Stahl sent a beautiful ball through and Lee was there to finish once again.

Wilsonville managed the rest of the game as time drained from the clock, and the Wildcats maintained their 5-3 lead.

Lee’s two goals were critical, not only because they helped secure the victory, but because they show signs of momentum. After getting her first goal of the season last week against Lincoln, Lee is looking to continue her scoring streak, especially as Wilsonville heads into the final stretch of the preseason.

Sophomore Jenna Weiss credited Lee for tonight’s performance, emphasizing her importance to the team. “Renee stepped up big tonight and scored two huge goals for us.”

In the post-game huddle, Sheppick stressed how important each and every team member was in tonight’s victory. Senior captain Kylie Aube – who came up big tonight in her first game back from a quad injury – echoed his thoughts, saying, “I think that we worked well as a team today and rallied around each other even when we were down. We came back and fought for it, and it showed in the score.”

Looking ahead to next week, the Wildcats take on 6A powerhouse Sherwood at home on Tuesday. The Bowmen have been firmly situated in the top three of the OSAA rankings all season, and are going to prove to be a tough opponent. If the Wildcats can continue the momentum they’ve built in the last two games, it should be an exciting battle between two great teams.