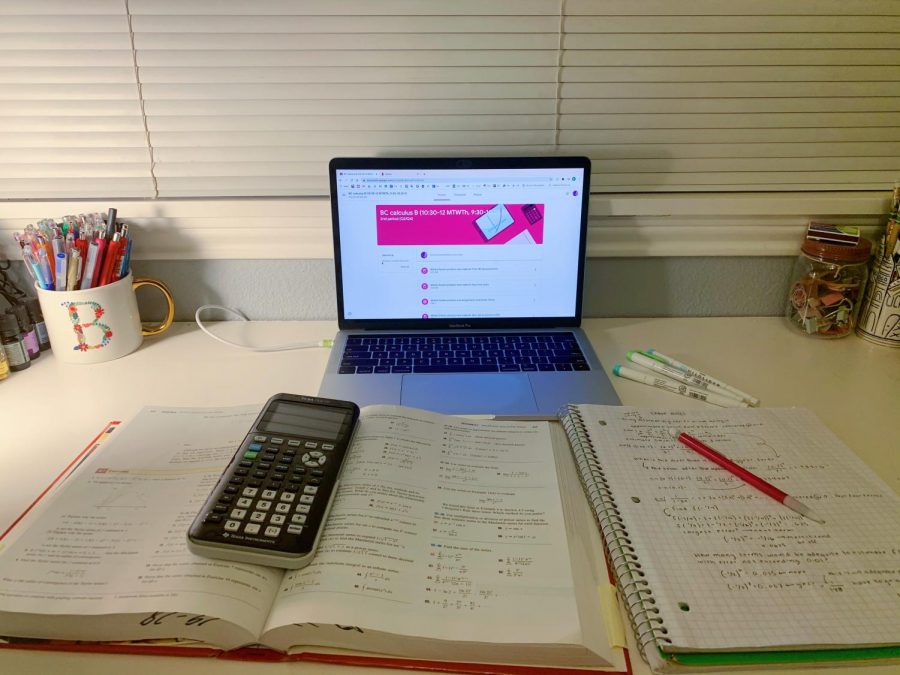 Senior Bella Glastra van Loon shows off her studying set up for her Calculus final. This year, finals week is unlike normal years.

The time of the year that all students greatly look forward to is here: finals! However, this year being all online makes finals look a little different than what WHS students are used to. Normally, students will only take finals twice a year: once at the end of semester one and at the end of semester two. But this year being on a quarter system rather than a semester schedule, finals occur four times a year.

This week is the end of quarter two, meaning the three classes that students are taking are handing out their final exams. Traditionally, “finals week” consists of a couple full days at the beginning of the week with three half days at the end of the week, also known as “finals days.” But this year, there are no half days that are considered finals days.

For others, including senior Kailey Galusha, not having the set finals week has actually caused them to forget that classes were ending and finals were to be taken soon. Usually finals week is made very known throughout the school community and reminders are constantly being thrown out about class schedules being different.

This year, finals week concludes on Thursday with a day off on Friday which is different from normal years where finals week would conclude on Friday leaving Monday as a day off. Finals week is just another aspect of this school year that is different from normal years, but students and teachers are adapting quickly. Quarter two is nearing its end with quarter three beginning next Monday!