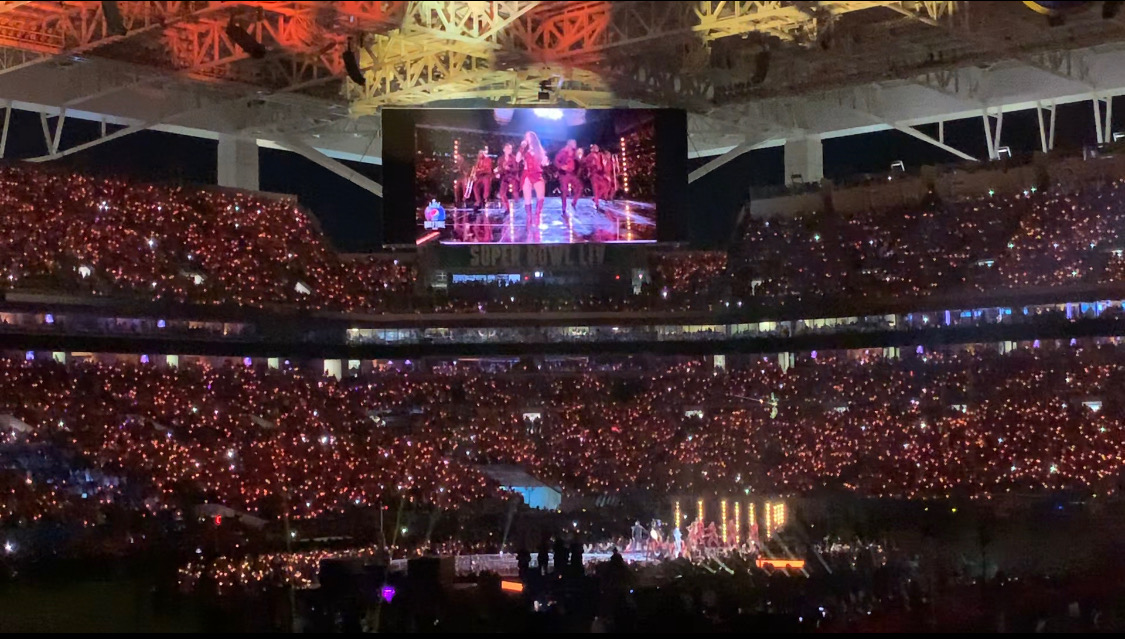 Superbowl LV has happened and what a blowout that game was. While Chiefs fans began getting nervous, The Weeknd took the stage during halftime to give fans an entertaining intermission before the Buccaneer’s came back to crush the Chiefs. In honor of this last weekend’s show, WHS seniors Halle and Kylie ranked their top five, including one honorable mention, Superbowl Halftime Shows during the 2010’s and 20’s.

Hi, I’m Kylie Hadden. My family loves to watch the Superbowl each year together as it’s a great way to wrap up the NFL season. One of the best parts of the Superbowl is waiting to watch the highly anticipated halftime show performances by well-known performers. After watching the Weeknd perform this year, I started to reminisce back to past performances from when I was younger. After some careful consideration, I’ve created my list of what I believe to be my top 5 Superbowl performances from the 2010s and 2020s. This was difficult because there are so many amazing performances, but those that are on my list are the ones I believe had the greatest impact on me, as well as everyone watching.

Although Justin Timberlake didn’t make my top 5 list, I still loved his performance. Like many other performances, he danced and sang to some of his most popular songs. My favorite part of the performance was his tribute to a former halftime performer, Prince.

Katy Perry’s entrance will definitely be one of the most iconic entrances. As the lights shined on her, she stood tall on a huge robot lion. This wasn’t the only stage decor that shocked us. The stage floor showed graphic images and dancers wore interesting costumes for the theme of the songs Perry sang. My personal favorite was the beach themed costumes. Missy Elliot also performed some of her most popular songs that made everyone in the audience dance.

The performers for Superbowl LIV provided football fans around the world with a dance-filled performance. Shakira and Jennifer Lopez came to dominate the stage as they danced like no one was watching. With each song they sang, they both danced to very advanced choreography. It was extraordinary. What was special about this performance for many is that it brought Latin pride and cultural diversity. It was great to hear a different music style from other performances in the past.

With a stadium full of colorful signs, decorations, and fireworks, Coldplay came on the screen looking ready to have a great time. Fans who were surrounded around the stage were jumping up and down with excitement. There was also a large marching band there to play all of the well-known songs with Coldplay. Coldplay wasn’t the only performer there at Levi’s Stadium that night. Beyoncé and Bruno Mars, former Superbowl performers, were the special guests. They performed their new songs but also had a crazy dance battle on stage. Even though I was watching on a screen, it made me want to dance! I’ll never forget how impressed I was watching Coldplay, Beyoncé, and Bruno Mars.

The Queen B absolutely rocked her Superbowl performance. Her confidence, vocals, and choreography made the show entertaining. Everyone in the crowd seemed to be enjoying their time and dancing the night away. She sang “Run the World (Girls),” “Crazy in Love,” and many other of her popular songs. In the middle of her performance, the crowd witnessed a Destiny’s Child reunion. Kelly Rowland and Michelle Williams made quite the entrance popping up from under the stage. I personally love Destiny’s Child and was extremely excited to see them perform together again. I also enjoyed all the dancers Beyoncé had on stage with her; they were all talented and brought the energy up in the stadium even more.

Bruno Mars has always been a performer. At a young age, you could tell that he was going to be a huge star ever since he impersonated Elvis Presley. I’ve always have been a fan of Mars, but his performance at the Superbowl just sent chills down my spine. He sang, danced, and entered his performance on a moving platform playing the drums. At first, it was weird to me how the Red Hot Chili Peppers were the special guest because their music types are different. However, Mars did an amazing job of transitioning to the Red Hot Chili Peppers. As he finished up his song “Runaway Baby,” he started singing the chorus to the Red Hot Chilli Peppers’ “Give It Away.” Overall, this performance was filled with lots of energy and swag.

Hi, I’m Halle Isaak! I’ve grown up watching football and the Superbowl every year, therefore I’ve seen my fair share of Superbowl performances. After watching the Weeknd this past weekend, we were inspired to rank all of our favorites from the past eleven years. It was very difficult to decide just from these recent shows, but I was able to narrow it down to these top five plus an honorable mention!

Oh, Superbowl LV. The year of COVID, a game that became a major blowout, with the Weeknd headlining the halftime show. Some weren’t fans of this show, but to me, for what he was allowed to do while following COVID guidelines, I thought his performance was very well put together. I will say, the camera work in the gold hallways was not my favorite part of it all, but the end with all the dancers and him dancing on the field to Blinding Lights was spectacular to watch, especially when you could feel all the joy that The Weeknd displayed.

The start of the show was not my favorite despite knowing all of the songs that Coldplay played. It did lack a bit of energy at the start, but once Bruno Mars came in to perform Uptown Funk, the energy picked up and stayed as Beyonce came in. Let’s just say the most impressive part of the whole show was Beyonce and her dancers managing to dance on a football field. In heels.

Lady Gaga is one of those performers that you know won’t ever disappoint, and she surely didn’t disappoint in 2017. Probably the most iconic part of this performance was her just jumping off the roof and flying into the stadium. Iconic. This technically advanced performance really added that special effect that made it visually appealing to watch the entire time.

Katy Perry is another one of those performers who just always puts on a spectacular show. Coming in on a giant mechanical lion started the show off with a bang. One thing that stuck out to me with Katy is her costume changes. Not many headliners will do a costume change due to how short the performance is, but Katy decided to have four different outfits in a 12 minute set. The entire performance was one to be remembered. Especially left shark.

Bruno Mars is hands down one of my favorite performers I will ever watch. The start with the children’s choir singing Billionaire and the end with Bruno singing a special rendition of Just the Way You Are was both a perfect start and end to an almost perfect performance. The only reason this isn’t my all time favorite is because of the Red Hot Chilli Peppers. To me, it just didn’t seem like they fit together all that well, but Bruno’s solo performance makes up for it.

Beyonce is just so hard to compete with. Her dancing with her backup dancers all in sync while still managing to sing all of the songs will forever amaze me. Not to mention the amount of female empowerment that you feel while watching that performance is insane. I think it was even more special that her Destiny’s Child bandmates were able to join her on stage to sing Single Ladies.