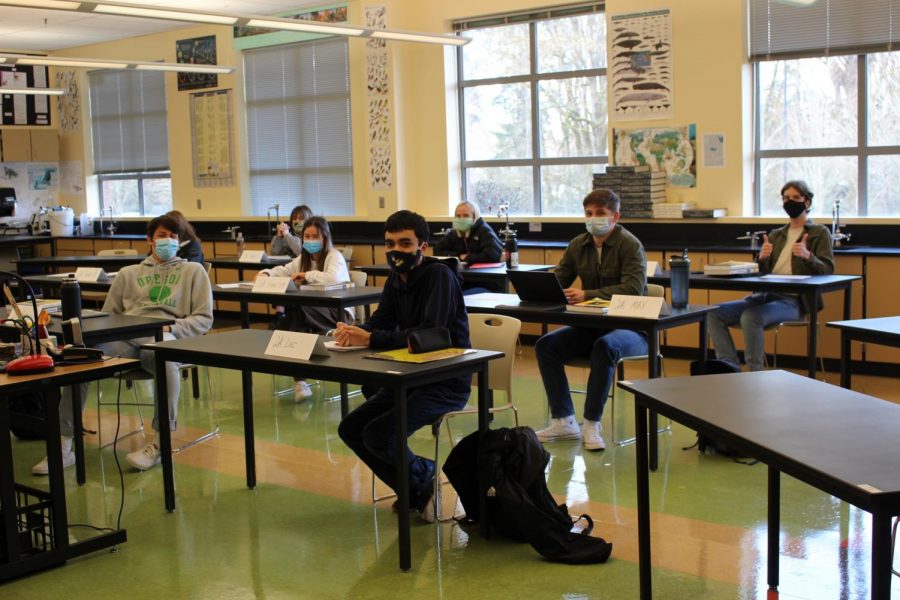 One of the AP Biology classes on the first day back in the hybrid schedule. AP Biology was a quarter one and three class where students have a three week break between the end of class and their AP test.

With the quarter schedule WHS adapted this school year, students in AP classes for quarters one and three end their class completely two to three weeks before the actual AP test comes around. This causes problems, as students are responsible to study for these tests during those off weeks to study and review all on their own, while still taking their quarter four classes.

Senior Kyra Allen had to take two AP tests this week, AP Government and AP Literature, that were both from quarter one and three classes. “If you don’t stay up with your studying on your own, you don’t have anything to hold you accountable during those off weeks,” Allen expresses. This was the major worry for most students that had to take these few weeks off between classes and tests since you no longer have teachers giving you grades for doing your review work. But on the other hand, after the AP test is finished, “the class is over and you have no more stress regarding that class.”

For AP classes that take place during quarters two and four, students are facing a much different problem: not having enough time. Because the normal AP tests fall just a couple weeks into the fourth quarter, almost all of these AP classes decided to move their testing date to the late test, something that is usually never recommended in normal years. By doing this, teachers are able to get as much time possible for their students to cram all the material in while still attempting to have time to review.

Allen is also taking two late AP tests this May, AP Calculus BC and AP Statistics, in order to get the maximum amount of review time in class as possible. Allen, and many other students, agree that during quarter four, classes are “super fast paced” and by the time you have to take your test “you may not feel ready.” However, for these classes, students are able to only have to focus on mock exams and in class reviewing for their few classes happening that quarter, possibly relieving some stress for students.

Even though the quarter schedule is something that some AP students aren’t fans of, everyone involved is working with what time they have as best as possible!