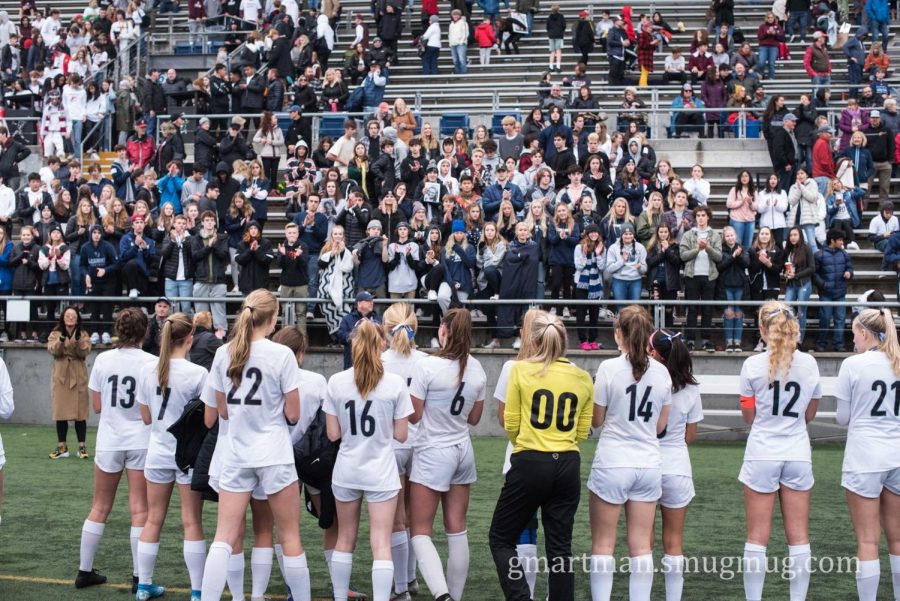 The Wildcats, a team with ten seniors, thanked their fans for the support during their best season to date.

The Wildcats dominated for 100 minutes but fell short in PKs, 4-3.

After being knocked out by the Raiders in the first round last year, Wilsonville was eager to get their shot at redemption.

It came on Saturday afternoon at Hillsboro Stadium in the state championship match. Crescent Valley entered ranked #1 in the state, having not given up a single goal in the postseason. On the other side, Wilsonville, ranked third, entered as an offensive powerhouse having scored 19 goals in the first three playoff matches.

The two sides battled to a draw after the first 80 minutes, but the score was not an accurate reflection of the way the game played out. Wilsonville dominated possession the entire match, with the ball remaining almost solely on Crescent Valley’s defensive half. The Wildcats outshot the Raiders 11-1 in regular time and had far more chances, including three corner kicks in the final seventeen minutes.

They just could not put the ball in the back of the net. The Raiders defense was far stronger than anything Wilsonville had faced as of late, and they posed a threat to the Wildcats’ typical playstyle.

Overtime told a similar story. Wilsonville sophomore Lindsey Antonson had four shots in the twenty-minute period, with one skimming off the crossbar and another coming in the final ten seconds of the second overtime, but the score remained 0-0 after 100 minutes of play.

Then came the PKs. Both teams made their first, then Wilsonville missed the second on a controversial call, as the ball hit the bottom of the crossbar and bounced straight down. Crescent Valley took the 2-1 lead. Sophomore Karina Borgen stepped up and finished the third PK for Wilsonville, followed by a save from senior keeper Kendall Taylor to even up the score at 2-2.

Wilsonville’s fourth shot went wide left before their fifth shot found the back of the net, but Crescent Valley finished both of theirs to win the state title for the second year in a row.

It was a tough loss for the Wildcats, who certainly controlled the game in its entirety. After the match, coach Dwight Sheppick told the team something that everyone in the stadium was feeling: “Soccer’s not fair.”